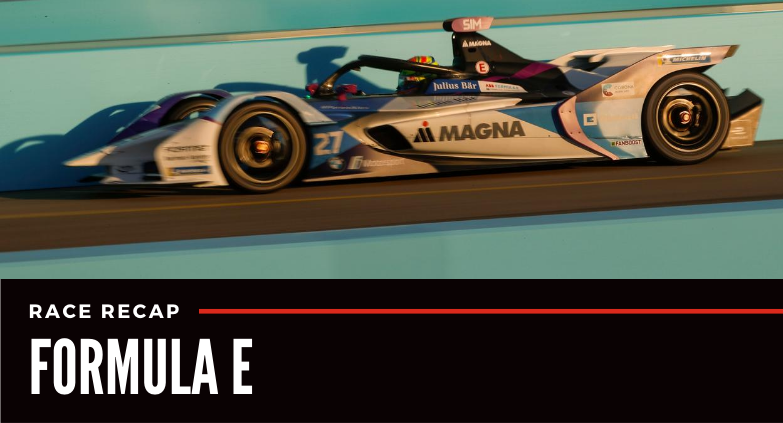 Berlin. Season 6 of the ABB FIA Formula E Championship kicked off its grand finale with the first of six races on the site of the former Berlin-Tempelhof Airport (GER). BMW i Andretti Motorsport driver Alexander Sims (GBR) finished ninth and picked up points in the Driver and Team competitions. Maximilian Günther (GER) came across the finish line in eighth place, but was subsequently disqualified for exceeding the amount of energy permitted during the race. The next race takes place on the same layout tomorrow (Thursday).

Following a good show in practice in which Günther was third-fastest in the second session, the two BMW i Andretti Motorsport drivers were lacking pace in qualifying. In the end, Günther started from 12th on the grid, with Sims having to settle for 16th place. In the race, the BMW i drivetrain once again demonstrated its excellent energy efficiency. While many other drivers were forced to save energy towards the end of the race, the BMW i Andretti Motorsport drivers were able to gain a few places in the closing stages. The fightback resulted in eighth place for Günther and tenth for Sims, although Sims was then promoted a position following Günther’s disqualification. Victory in race six of the season went to championship leader António Félix da Costa (POR, DS Techeetah).

Reactions to race 6 in Berlin:

Roger Griffiths (Team Principal BMW i Andretti Motorsport, team standings: 2nd place):
“After what we saw in practice, we really thought we had a chance of making it into the Superpole in qualifying. Unfortunately, in hindsight, our strategy of two warm-up laps for the tyres was probably not ideal. When you then have to start quite a long way down the field, it is obviously difficult to battle through to the front in the race. Despite that, thanks to our efficient drivetrain, we were still initially able to achieve our goal for today of finishing in the top ten with both cars. We disputed Maximilian Günther’s disqualification intensely with the FIA, because we believe everything was okay, however we obviously accept the decision. From a sporting point of view, looking ahead to the coming races, we must take one or two steps forward to get where we want to be – on the podium.”

Alexander Sims (#27 BMW iFE.20, starting position: 16th place, race result: 9th place, points: 48, driver standings: 3rd place):
“All in all, that was a tough day. It actually started well for me, with sixth place in the first practice session. Then we possibly went the wrong way a little with our set-up, and consequently lost some ground. Our speed was really good again in the race. Although the balance was not perfect, I was able to work my way into the top ten. We must definitely work on our qualifying performance for the coming races.”

Maximilian Günther (#28 BMW iFE.20, starting position: 12th place, race result: DSQ, points: 44, driver standings: 5th place):
“The disqualification is a great shame, but we accept it and focus on the next race. Our energy management was very good again today, and I was able to improve a few positions in the race, even though I was unfortunate with ATTACK MODE in a number of situations and consequently lost ground. Generally speaking, it was fantastic to be back in a race car.”