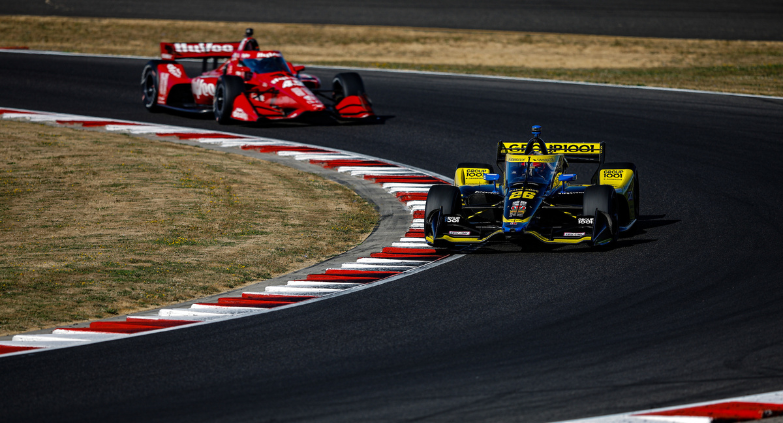 In the shadow of sprawling evergreens, the Grand Prix of Portland hosted the penultimate round of the 2022 NTT INDYCAR Series season on Sunday. The quadrant of Andretti Autosport Honda entries fought through 110 laps on the 12-turn, 1.964-mile course at Portland International Raceway.

All eyes were on the opening corner, but the side-by-side action remained clean as the field settled into race pace. A few corners into the first lap, the No. 28 DHL Honda of Romain Grosjean, who started 15th, found himself off-course in Turn 7. Keeping control of the car, Grosjean returned to the track positions down and with a hidden injury to the front wing. That damage caused difficulty for the DHL driver for the remainder of the race even leading to the No. 28 Honda to receive two penalties for failing to return to course safely. Grosjean would bring the No. 28 DHL Honda across the finish line in 19th.

“Another tough race today,” said Grosjean. “The car was good at the start of the weekend, but when it came to the race, it wasn’t there. It’s frustrating to have these issues when I know we can be competing at the front. Hopefully we can get back to where we were at Laguna.”

The highest finisher of the Andretti Autosport team was Colton Herta in the No. 26 Gainbridge Honda. After qualifying eighth, Herta was promoted one position to seventh as the No. 2 was demoted six-positions following a penalty. The American driver was agile while making smooth, yet quick, passes of the competition. Herta went on to make eight passes for position, including a gain of three positions in a single lap on Lap 17. Herta found himself competing with teammate Alexander Rossi for most of the 110-lap race before completing the day in sixth.

“It was an okay day - nothing great, nothing bad,” said Herta. “We moved up from our starting position and almost got a top five. Seems like the Gainbridge Honda had good speed, but there are a few things that we need to capitalize on going forward. Overall, a positive weekend. Looking forward to defending my wins at Laguna Seca and go for a three-peat there.”

Just behind Herta was Alexander Rossi in the No. 27 AutoNation / NAPA AUTO PARTS Honda, who started ninth. Rossi ran a consistent race with quick pit stops by the No. 27 crew to allow the No. 27 to never fall below 11th place. The race pace slowed when the first and only full-course caution appeared on Lap 84.

When the field returned to green flag racing on Lap 88, Rossi was slowed by contact ahead forcing the No. 27 Honda wide towards the edge of the course and down three positions to eighth. Rossi would gain one position back with a drag race on Lap 90 with (Josef) Newgarden before completing a clean pass into Turn 11. Rossi would remain in seventh for the remaining 20 laps of the race.

“It is a little disappointing, because we had a shot at the podium until the last restart,” said Rossi. “People were side-by-side and bouncing over curbs - we ended up on the wrong side of it. The pace of the No. 27 AutoNation / NAPA AUTO PARTS Honda was fantastic. The team did a great job in pit lane and the strategy was great. We certainly had the opportunity to be on the podium, but it came down to the track placement which is on me.”

Sporting a new blue and black Jones Soda livery, the No. 29 of Devlin DeFrancesco showed pace early gaining four positions on the opening lap. DeFrancesco would repeatedly battle with teammate, Romain Grosjean, making seven passes in the first half of the race to see as high as seventh place. The No. 29 Jones Soda Steinbrenner Racing Honda crew aided DeFrancesco with three quick, clean and consistent green-flag pit stops. DeFrancesco would cross the finish line in 16th to cap off the Grand Prix of Portland weekend.

“It was the most we could have asked for today with no mess in Turn 1 on Lap 1,” said DeFrancesco. “We had decent pace, but we need to qualify better while getting down to the roots of those issues. We look forward to Laguna for the No. 29 Jones Soda Steinbrenner Racing Honda and ending the season on a high note.”

The 2022 NTT INDYCAR Season comes to a head at the grand finale Firestone Grand Prix of Monterey at WeatherTech Raceway Laguna Seca on September 11, 2022.