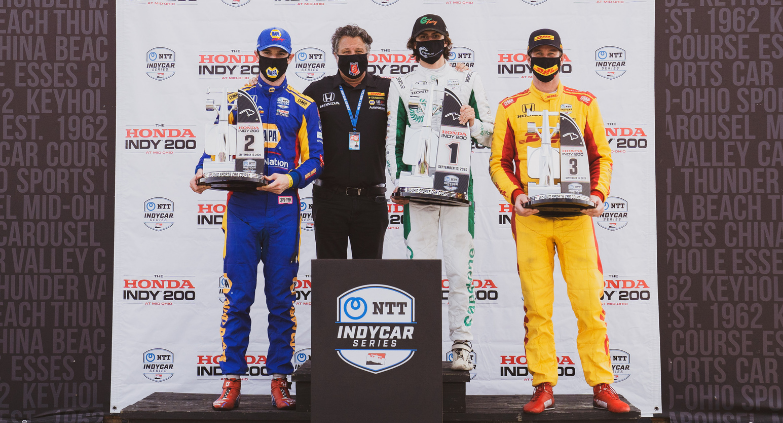 Andretti Autosport expects its drivers to be among the contenders for the NTT INDYCAR SERIES championship.

But Michael Andretti’s high-profile operation entered this weekend’s Honda Indy 200 doubleheader at Mid-Ohio Sports Car Course with just one podium finish. That was Alexander Rossi’s third-place effort in the second race of the REV Group Grand Prix at Road America on July 12.

Rossi, the winner of the 100th Indianapolis 500 presented by Gainbridge in 2016, doubled his and the team's podiums with a third place in Saturday’s Race 1 at Mid-Ohio.

Andretti Autosport finally hit it big in Sunday’s second race of the Honda Indy 200, sweeping the three podium positions. The dominant day was led by 20-year-old Colton Herta, who started on the pole and won for the third time in his career in the No. 88 Capstone Turbine #ShiftToGreen Honda.

“We’ve been knocking on the door almost every week and we’ve had the pace, but for some reason or another something has gone wrong, but we finally put everything together,” Herta said. “We got the pole this morning, had a stellar car - everyone on the Capstone Turbine crew gave me an incredible car, and it was an Andretti-Honda 1-2-3, so really proud to be powered by Honda, too.”

“We just need to be finishing on the podium every weekend,” Herta said. “It seems like we’re only on the podium when we win. If we can fill all of those other slots with seconds or thirds, I’ll be a very happy man.”

Rossi was second, just 1.3826 seconds behind, to score his highest finish of the season and the third podium of 2020 in the No. 27 NAPA AUTO Parts/AutoNation Honda.

“One-two-three for Andretti is pretty spectacular considering the year that we've had as a team, especially on the 27 side of things,” Rossi said. “To get two podiums this weekend is obviously a good boost for us.

“I'm so happy for Michael (Andretti) and all the guys at Andretti Autosport and Colton Herta and the 88 guys. It was a big day for us. It's something that we've needed, and it sets us on the right foot for the rest of the year, and hopefully we can build upon that and put this year behind us and have a much better 2021.”

Ryan Hunter-Reay, the 2012 series champion and 2014 Indianapolis 500 winner, rounded out the podium with a third-place finish in the No. 28 DHL Honda.

“It was a great day,” Hunter-Reay said. “Nothing really went wrong. It’s a positive. The whole team needed it. It’s been some frustrating times.

“It was nice to have a straightforward day. We’ll pick up from there and hopefully keep this momentum rolling. From my perspective, on the 28 side, we’re not really happy unless we are winning.”

Rossi entered the season as a leading contender for the 2020 NTT INDYCAR SERIES championship. But his season got off to a woeful start because of electronic and mechanical issues before turning into bad luck as the season progressed.

He entered the weekend at Mid-Ohio 18th in points.

“Obviously, there's been bad luck,” Rossi said. “There have been some mistakes. It's been one thing after the other. But I think the big thing is everyone on the team has stayed motivated and committed.

“There was never like a lack of self-belief, if that makes sense. It was just trying to reset each time and come back and try and put your best foot forward. It's great for the whole organization. It's the first time Michael has had a sweep of a podium since 2005, I think I heard. It's awesome. I'm really pleased for him.

“On our side, on the 27 side, to get two podiums in a row after the year we've had is welcome. Obviously, it's not a win. That's OK, I guess, and we'll just keep going forward and see what we can do at the Harvest GP here in a couple weeks.”

Rossi is one of the fiercest, most aggressive and determined drivers in the entire NTT INDYCAR SERIES. His battles against rival teams is legendary, especially the closing laps of the 103rd Indianapolis 500 against Team Penske’s Simon Pagenaud.

Sunday at Mid-Ohio, he was chasing down one teammate while being chased by another in this all-Andretti showdown at the end.

“It's tough just because you're all on pretty similar stuff, right, so you're all able to do the same lap time and you're just waiting for somebody to make a mistake or go through the tires a bit quicker,” Rossi said. “But ultimately it was one-two-three, kind of a second-and-a-half gap through the three of us through that final stint.

“Ultimately, Colton was on pole and he controlled most of the race, so I don't think we were going to be able to get him. But it’s good because you know that if it comes down to it, you'll always give each other a little bit more space than other guys that aren't your teammates. It's comforting when you're coming down to it that you're with guys that you know.”

Nobody loved it any more than the team owner.

“It’s so huge, so huge,” Andretti said. “Thank God we came here to Mid-Ohio. We were a little worried that we weren’t going to be able to get here, but Kevin Savoree (track promoter at Green Savoree Promotions) and those guys did a great job getting this race on, and it paid off for us, man.

“One-two-three. The way things have been going for us this year, this is huge for us, the whole team.”