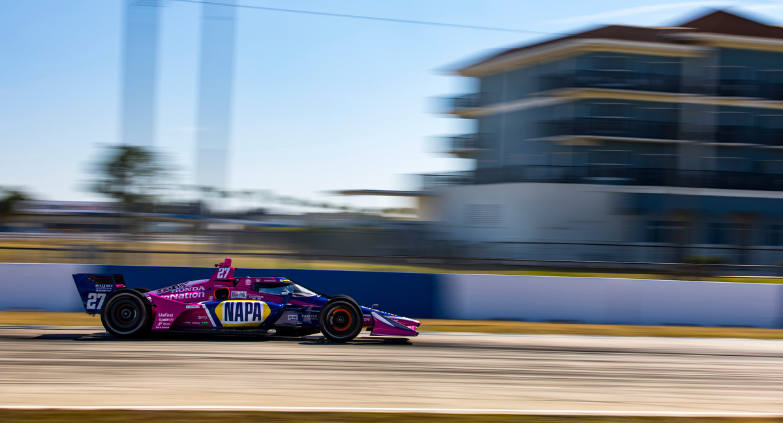 That quest begins this week with the Firestone Grand Prix of St. Petersburg that opens the 17-race slate. Four drivers – two returnees and two newcomers – are undertaking that challenge to become Andretti Autosport’s first INDYCAR champion since Ryan Hunter-Reay in 2012. They are:

-Colton Herta, who returns to the No. 26 Gainbridge Honda for his fourth full NTT INDYCAR Series season after winning three races and finishing fifth in points last year.

-Alexander Rossi, the 2016 Indianapolis 500 winner and veteran of the team, entering his seventh season with Andretti Autosport and driving the No. 27 AutoNation/NAPA Auto Parts Honda.

-Romain Grosjean, who after a sensational rookie season in a Dale Coyne Racing Honda, replaces Hunter-Reay in the No. 28 DHL Honda with Andretti Autosport.

-Devlin DeFrancesco, the rookie in the No. 29 Powertap Hydrogen Honda who joins the NTT INDYCAR Series after a year in Indy Lights with for Andretti Steinbrenner Autosport.

“It’s been a long time since Andretti Autosport has won an INDYCAR championship,” Rossi pointed out, echoing the sentiment of his teammates. “Ryan was the last one, so I think that’s the main target for everyone in this building.”

Be they new to the team or returning, all four drivers understand more consistently strong results are mandatory in 2022 to challenge for the title. Herta was the only Andretti Autosport driver to win a race in 2021 and the team combined for seven podium finishes.

As incredibly tight as the INDYCAR competition is, however, Herta knows Andretti Autosport isn’t lacking and will be in the thick of the hunt this year.

“It’s exciting to bring in new people with Devlin and Romain and hopefully continue where we left off,” Herta said. “I think we have really good cars, so if we can kind of continue development little by little and perfect everything, it should be a good year.”

Grosjean, the Swiss-born Frenchman who drove for 10 seasons in Formula One, joins Andretti Autosport after impressing everyone in the INDYCAR paddock in his 2021 rookie season. He finished on the podium three times and nearly won on several occasions. The 35-year-old said he and Andretti Autosport share a common goal in 2022.

“They want to win the championship; they haven’t done it for quite some time,” Grosjean said. “I haven’t won a race in 10 years, a championship in 10 years, so that’s definitely a goal we have in common. I think we have all of the ingredients.

“When you go into a season, it’s never easy,” he added. “You don’t know in advance. There’s so many things that need to be right. You need to be lucky, you need to be performing well, you need everything to go your way. Hoping that’s going to happen.”

DeFrancesco appreciates the luxury he’ll enjoy learning from three experienced INDYCAR drivers in his maiden season. His goal is clear: compete for Rookie of the Year honors. And while his racing resume may be the shortest of the four drivers, there’s one thing he won’t lack: