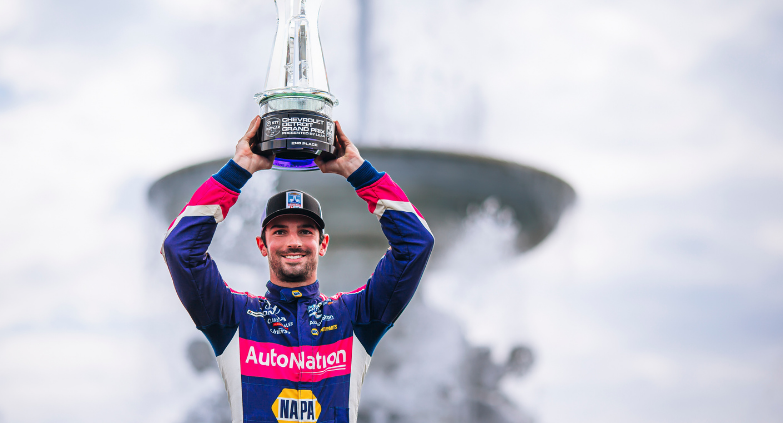 Andretti Autosport capped off the Detroit Grand Prix by seeing Alexander Rossi stand on the podium with a second-place finish. Rossi’s Motor City finish marked the team’s third driver to finish on the podium in six rounds of NTT INDYCAR SERIES racing.


Rossi and the No. 27 NAPA AUTO PARTS / AutoNation Honda showed speed. The team ran an alternate three pit-stop strategy that allowed Rossi to jump ahead of the competition in pit lane. His effort on the track turned a 12-second gap with the field leader with five laps to go into just a one-second difference crossing the finish line. Rossi’s charge to second made him the top finishing Honda of the race. It was his first podium of the 2022 season and 26th of his INDYCAR career.


Colton Herta finished the race eighth with his two-stop strategy. Herta and the 26 team took a gamble on fuel-saving, anticipating yellow flags that never came during the race. In both practice and qualifying, drivers had track time reduced due to a high volume of yellow and red flags during the session. Herta hit his marks and climbed as high as fifth during the race but would finish eighth overall with the Gainbridge Honda.


Romain Grosjean and the No. 28 team brought a new look to the track with an all-green Zapata-themed livery. However, Grosjean found himself lacking luck and the needed yellow flags. Attempting a two-stop strategy, the No. 28 eventually ran short on fuel and would have to make a third final pit stop with just three laps remaining. He finished the race 17th overall.


Devlin DeFrancesco had one of his best weekends, showing speed and composure throughout the weekend. DeFrancesco finished eighth in Practice Two, his best finish of any practice this season, and held pace amongst competitors when challenging for the Top 12 in qualifying. Race Day DeFrancesco ran as high as sixth in the race; his two-stop strategy also called for some help from yellow flags that did not materialize. He finished the race strong in 18th with valuable seat time and good, clean racing.

Andretti Autosport now turns its attention to Road America in Elkhart Lake, Wisconsin, for the Sonsio Grand Prix at Road America. The 55-lap race on the calendar’s longest road course takes place Sunday, June 12, at 12:30 p.m. ET. Fans can watch the race live on NBC and NBC’s Peacock. International viewers can use the INDYCAR Live! App.