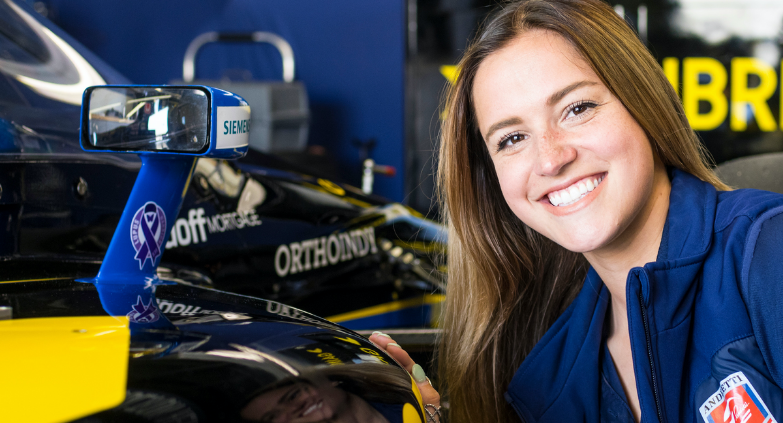 Andretti Autosport will run a unique decal on the mirrors of all five entries for the 106th Running of the Indianapolis 500 presented by Gainbridge. A purple ribbon surrounded by the words “Lupus Warrior” appears on the cars as a unique representation of the battles Andretti Autosport Communication Manager Emilee Hunt has endured living with Lupus.

Defined by the Mayo Clinic, Lupus, or Systemic Lupus Erythematosus, is when the body’s immune system attacks tissues and organs, also known as an autoimmune disease. Lupus is hard to diagnose as many of its symptoms mimic other conditions, which is part of what makes Hunt’s story so heart-wrenching.

In early childhood, Hunt began showing signs that something wasn’t quite right. At 9-years-old Hunt was diagnosed with Raynaud’s Disease, a circulatory condition causing the extremities to become discolored and numb. Hunt was given an autoimmune test to see if there woule be potential health issues aside from the Raynuad’s. The test returned positive but was unable to give her any specific answers to what autoimmune disease she might be facing alongside Raynaud’s.

“I was on spring break with my friend and her family when I got a rash on the back of my legs. We thought it was sun poisoning at the time. I remember my friend's mom putting cream on it and just being in so much pain I would scream into the pillow.

“At 16 I was diagnosed with Lupus, which is young for the diagnosis. After that, I was in the Emergency Room a couple of times a month for numerous issues, including GI, neurological, a common cold that would send my body into overload for longer than it should have and overall pain and weakness in my body. I just felt like my body was shutting down. I couldn’t do regular functioning tasks like brush my hair and teeth or bathe on my own some days.”

The final diagnosis was vindication for Hunt, who had long dealt with accusations that she had manipulated and falsified everything. She once had an ER doctor tell her parents that she was trying to get pain medications, but her parents never doubted her. However, the diagnosis still left many confused and concerned, silencing Hunt.

“I was quiet about my Lupus originally,” said Hunt. “I was embarrassed with all the testing. I lost friends because people were terrified. I think they were afraid because I was so sick. They had seen me decently well, and then a week later, I wouldn’t be able to function. I used a wheelchair off and on for a year because I couldn’t always walk on my own.

“I had to have my school work dropped off to my house when I couldn’t go in person. I was embarrassed to feel different. Friends visited me in the hospital – and hospitals are scary at 16. At the time, I was involved in dance, and I ran track, but I had to stop. I had to stop being involved in school, which was my life. I was frustrated I had to quit all the things I loved, I couldn’t go to school, and I couldn’t figure out what I was supposed to do to get my normal back.”

At 18, Hunt finally found the proper treatment. She began the very potent Benlysta – a biologic treatment given intravenously (IV). She also began treatment for her newly diagnosed POTS (Postural Orthostatic Tachycardia Syndrome) which causes fainting, low blood pressure, and rapid heartbeat. Having her Lupus more under control and diagnoses and treatment of the rare POTS disease left Hunt in fighting shape.

What she once felt like hiding now empowered her. Hunt took the official Lupus slogan, “Lupus Warrior,” to heart and embodied it entirely. She tattooed “warrior” in her sister's handwriting on the wrist where she received her Benlysta IV. As Hunt gets treatment once a month, her warrior tattoo is a reminder of encouragement.

“Once I got my body under control, I decided not to be quiet,” Hunt said. “I didn’t want people to feel what I felt and go through what I went through. At first, I started to educate myself. A lot of big words I didn’t understand were being told to me but I was lucky to have my rheumatologist who would explain everything to me in a way I could understand at the young age. Once I began to get my knowledge of the disease and how it affected my body, I decided it was time to start educating others. If I can help one person by sharing my story, the good and the bad, then I am happy. I want to be the person that understands and is there for not only support, but answers and the occasional tip and trick.”

With the help of a friend and colleague, John Brunner, Hunt began activating at the track. Hunt credits Brunner’s guidance and encouragement as a catalyst in her career in public education and engagement.

“The first thing I did in racing was with the Road to Indy Racing ladder system and the Lupus Foundation of America Indiana Chapter. We raised money and put decals on the cars to raise awareness. Throughout May, we brought people out from the foundation who had Lupus to be honorary starters and give the command. We raised funding through promotion at the track, and overall, it was successful.”

Hunt had her two worlds collide in her Lupus activation at the Indianapolis Motor Speedway. Her father, David Hunt, has made a career in racing, currently working in IMSA race control operations and as a spotter for Andretti Autosport. Emilee Hunt had long been integrated into the racing community through her father. Thus, it was natural when her career took shape as a communication manager in motorsport.

This year is the first year Hunt has worked with Andretti Autosport, and for the first time, her activation during Lupus Awareness Month will be a part of the biggest spectacle in racing. Andretti Autosport CEO and Chairman Michael Andretti schemed on behalf of his employee to run the purple ribbon on his Indy 500 entries. The surprise overwhelmed Hunt.

“For the first time, the world's largest race will run a lupus awareness decal,” Hunt said. “Growing up in racing, the 500 is it. It’s the top. Personally, making it here but being with a group of people who also want to support Lupus awareness on my behalf is remarkable.

“For someone like Michael Andretti to come up with this idea put me at a loss for words. Many people wouldn’t think to do it. Anyone could have thought of the concept but for him to come up with the plan was excellent. It’s crazy to have the support that I found at Andretti Autosport.”

Hunt’s plans to continue to raise awareness and support for those with Lupus will reach beyond May as she competes for Miss Indiana, the official state preliminary to the Miss America pageant, in June as Miss Wabash Valley. Hunt has been developing her social impact initiative, Living with Lupus, Raising Awareness for Invisible Illnesses. Her social impact initiative will become a state-wide awareness program at Miss Indiana on June 18 which will then elevate to a national platform if given the opportunity to compete for Miss America.

Until then, look out for the Lupus Awareness ribbon on the Andretti Autosport entries this May. The 106th Running of the Indianapolis 500 Presented by Gainbridge. Practice can be watched live on NBC’s Peacock streaming service from Tuesday, May 17- to Friday, May 20. Qualifying will air on NBC and Peacock Sunday, May 22. Race day is Sunday, May 29, with the green flag flying at 12:46 a.m. ET. The race is televised on NBC and in Spanish on UNIVERSO. Listen to the race with INDYCAR Radio or Sirius XM. International fans can follow the race with INDYCAR Live! App.