Andretti Autosport Results at Mid-Ohio Shift Focus to the Future

Andretti Autosport Results at Mid-Ohio Shift Focus to the Future 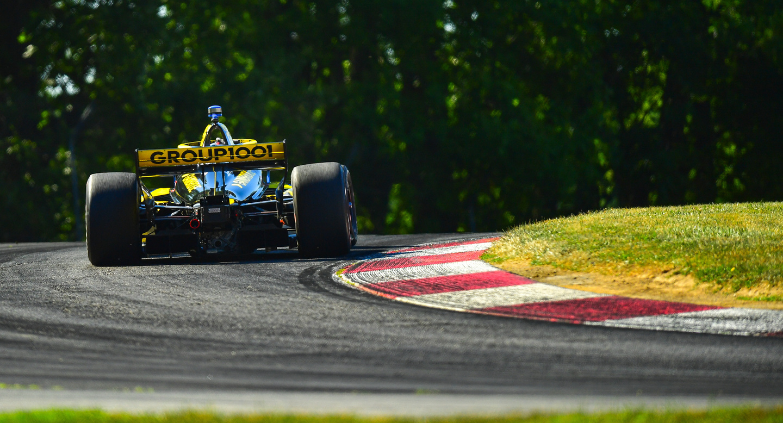 Andretti Autosport qualified two cars in the top-12 this weekend at the Honda Indy 200 at Mid-Ohio. With the drop of the green, drivers worked to advance in the field before a round of incidents amongst teammates cost valuable track positions. The melee brought about high tensions and lowered finishing results.


Colton Herta showed dominance all weekend as a front-running Honda. He qualified inside the Firestone Fast Six, his third top six qualifying result this season. After qualifying fifth, Herta fought for position up front in his No. 26 Gainbridge Honda, leading seven laps. A yellow flag would interrupt his pit strategy and push Herta to the rear of the field. The No. 26 was eventually spun off track late in the race. While not the targeted podium finish, Herta recovered to cross the line 15th.

Devlin DeFrancesco qualified 21st after a successful effort to avoid on-track incidents and take the checkered flag in 17th position. DeFrancesco spent much of his weekend dialing in his Andretti Steinbrenner No. 29 PowerTap Honda. He was happier with his car on race day and fought to make up positions.


Alexander Rossi showed speed throughout the weekend. He qualified inside the top 12 for the third weekend in a row with his No. 27 NAPA AUTO PARTS / AutoNation Honda. From the start, Rossi began his push for a top 10 position. He eventually made his way as high as ninth before repeat incidents of on-track contact with teammates lost ground for the 27 team. Rossi was served a drive-through penalty for avoidable contact, pushing Rossi further down the field for a 19th-place result.


Romain Grosjean was disappointed with his qualifying position of 17th and determined for a better race finish. Grosjean competed for the opening stint on the Firestone primary black tire, but once on the alternate red tires, Grosjean maneuvered himself into the top 10. Disaster struck for the No. 28 on Lap 58 while making a pass for ninth. Grosjean and Rossi made contact, sending Grosjean off track into a barrier. The car was returned to track, albeit a lap down. In haste to regain positions, Grosjean connected on track with Herta and was assigned a drive-through penalty. He would take the checkered flag in the 21st position.


“Our race results in Mid-Ohio did not go as planned,” said Michael Andretti. “Sunday’s display was disappointing and unacceptable and not the way we operate - on or off the track. Racing is a passionate sport, and we have four highly competitive drivers; however, we are one team at Andretti and our drivers need to remember that we expect them to work together for the betterment of the team. That’s the way it will be going forward.”


The NTT INDYCAR SERIES will be back in Toronto, Canada, for the first time in two years due to COVID-19. The Honda Indy Toronto race has long been a fan favorite bringing out large crowds in downtown Toronto. The race will air on NBC’s Peacock and can be listened to live on INDYCAR Radio.