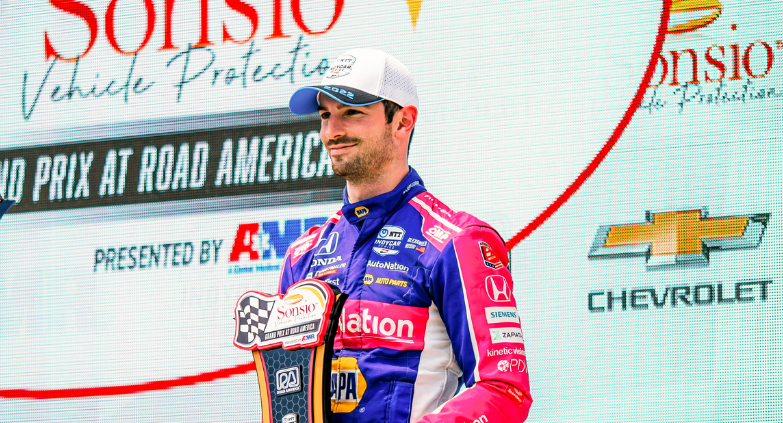 Andretti Autosport had its strongest run of the year, finishing third, fourth, fifth and 18th in the Sonsio Grand Prix of Road America. Alexander Rossi took home his second straight podium of the season with a third-place finish. Behind Rossi were teammates Romain Grosjean and Colton Herta in fourth and fifth, respectively. Devlin DeFrancesco battled back from two stop-and-go penalties to finish 18th overall.


Alexander Rossi kicked off the weekend as the NTT Pole Award winner. This was his first pole in three NTT INDYCAR SERIES seasons. Rossi topped the charts with a lap time of 1:44.8656 in his No. 27 NAPA AUTO PARTS/ AutoNation Honda. When he took the green flag for the race's start, he was immediately asked to show his racing prowess due to three consecutive yellows leading to three restarts. Rossi held steady and kept his lead for 14 laps before pitting. Pit sequencing would throw Rossi into second place. He would hold that position until a final pass was made on the last lap of the race. Rossi’s third-place finish was his third podium finish at Road America.

Romain Grosjean had a resurgence in the Sonsio Grand Prix of Road America after a string of rough weekends. Grosjean gave credit to his teammates for helping him find the proper setup to make a strong qualifying effort that sorted him with a seventh place starting position. Grosjean quietly maneuvered his way up to a fourth-place finish by fending off Colton Herta in fifth and challenging Rossi for third in his No. 28 UNIFIRST/ DHL Honda.


Colton Herta proved to be smooth and steady over the race. He qualified fifth, making his second Firestone Fast Six appearance of the year. However, due to the damage sustained to Herta’s engine in the final practice before the Indianapolis 500 the engine was replaced leading to a six-place grid penalty that was enforced at Road America. This penalty had Herta start 11th overall. Undeterred, Herta took his No. 26 Gainbridge Honda to the front. In a caution-filled start to the race, Herta made the most passes on track of any competitor. He went on to finish the race fifth.


Devlin DeFrancesco had a wild ride but nonetheless an impressive finish. DeFrancesco went wheel to wheel with competitors at the start of the race. However, one of his moves would bring him into the pitlane for a stop-and-go penalty. The penalty was served on Lap 10, but on Lap 17, DeFrancesco would receive a second penalty, this time for speeding in pit lane. He would push on to finish 18th after starting 21st.


Next on the NTT INDYCAR SERIES schedule is the Honda Indy 200 at Mid-Ohio in Lexington, Ohio. The 2.258-mile, 13-turn road course has long been a favorite for INDYCAR fans. The race takes place Sunday, July 3, at 1 p.m. ET on NBC and NBC’s Peacock.