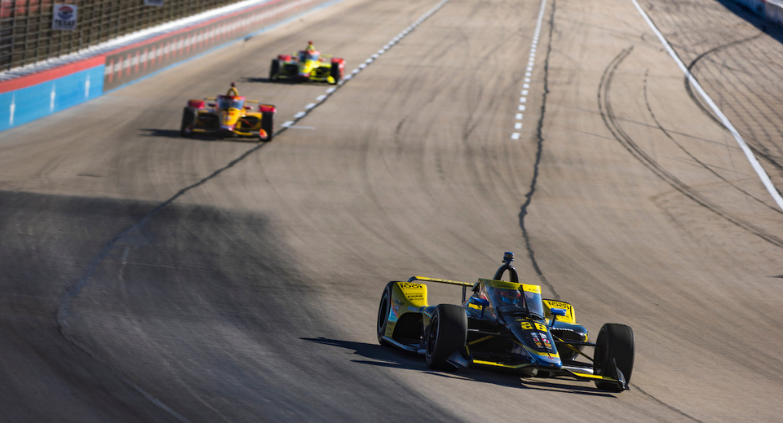 Andretti Autosport had high hopes for Texas Motor Speedway with strong results in practice, but the XPEL 375 was anything but kind to the four-car lineup.


Driver Colton Herta faired the best with a 12th-place finish after starting the race ninth. Herta and the No. 26 Gainbridge Honda looked like contenders from the start of the race and ran as high as fourth on the superspeedway. Texas Motor Speedway is a demanding track for both car and driver; Herta pushed to get the most out of the No. 26, but he was unable to regain position after trouble in pit lane slid him further down the field.


Alexander Rossi would have no luck at all if it weren’t for his bad luck. Rossi took the green flag in the No. 27 NAPA AUTO PARTS / AutoNation Honda and made 11 laps before an electrical issue would bring him into the pit lane. This ended Rossi’s race early. He was joined by teammate Romain Grosjean around Lap 100 who suffered a mechanical issue that brought his race to an early end.


NTT INDYCAR SERIES Rookie Devlin DeFrancesco showed promise in his first superspeedway event. The Indy Lights graduate was eager to please as he and the No. 29 PowerTap Honda crew of the Andretti Steinbrenner entry diligently worked through the setup for the race. DeFrancesco was up to 12th from his 17th qualifying position when a mistake sent DeFrancesco into a spin, collecting Helio Castroneves and Graham Rahal. All drivers walked away unharmed and were cleared by the ARM Medical Team.


A rough weekend cannot break the Andretti Autosport fighting spirit. The team has three weeks to regroup before taking on the streets of Long Beach. The team has plenty of motivation headed into California. Herta returns to his home race as the 2021 winner of the Acura Grand Prix of Long Beach. Fellow California-native Rossi celebrates his 100th race start at the street course event. Grosjean will be after redemption as contact ended his 2021 campaign in Long Beach early and DeFrancesco will have the experience of St. Petersburg to build on for a strong result for his Long Beach debut.