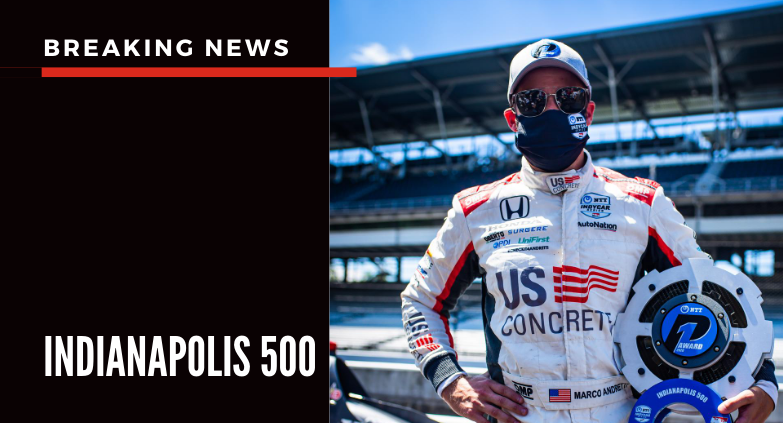 For the first time in 33 years, an Andretti will lead the Indianapolis 500 to the green flag.

It was his family’s first Indy 500 pole since Mario Andretti won the pole in 1987 and the first pole for a car carrying the No. 98 since Parnelli Jones won the pole for the 1963 Indianapolis 500.

“I was emotional,” Marco Andretti said. “It's funny because I was screaming after the run, so I don't have a voice. Everybody is thinking I'm crying, but I just can't talk right now. I was emotional. We put so much into it. This place means so much to us as a family. We've just been through so many ups and downs at this place. Obviously, my cousin, John is riding with me, my grandfather from home. We know family is pulling for us. We live and breathe this sport, this race in particular.”

Andretti recorded a four-lap run of 2 minutes, 35.7985 seconds (231.068 mph) in the No. 98 U.S. Concrete/Curb Honda to beat Scott Dixon’s provisional pole run by .017 mph – the third-closest margin in the race’s history by speed. The nine drivers in the Fast Nine Shootout each had one attempt in sunny but blustery conditions, with a steady north wind of 12 mph. As the fastest qualifier Saturday, Andretti was the last driver on track during the Shootout.

Dixon set the time to beat of 2:35.8098 (231.051 mph) as the fifth car to go out in the No. 9 PNC Bank Chip Ganassi Racing Honda but settled for his fifth front-row starting position at Indianapolis.

“I was definitely watching (Marco Andretti),” Dixon said. “Sometimes you don't want to know the results, right? We knew (Andretti) were going to be strong. Right from the get-go, I knew Hinch (James Hinchcliffe) was going to be a good sort of benchmark, and the same with (Alexander) Rossi, because it looked like he was more trimmed out than the rest of them, a little more aggressive. Unfortunately, it was not quite enough.

“There’s so many things, I think, through the run that you could definitely equate maybe to going that little bit faster. I'm sure they had similar issues on their side.”

Takuma Sato, the first car to run after sitting provisionally ninth Saturday, qualified third with a four-lap average of 230.725 mph in the No. 30 Panasonic/PeopleReady Honda, while rookie Rinus VeeKay – driving the lone Chevrolet in the Fast Nine –qualified fourth at 230.704 mph in the No. 21 SONAX entry, the best qualifying result for a teenager in Indianapolis 500 history.

The pole position is the sixth of Marco Andretti’s INDYCAR career and the 42nd INDYCAR pole by cars owned by his father Michael Andretti. Michael Andretti never won a pole for the Indy 500 as a driver, but his team did in 2005 with Tony Kanaan.

“I was joking with Dad,” Marco Andretti said. “I'm like, ‘This is probably like my third legitimate shot as far as just outright pace in 15 years.’ When I lost the ‘500’ in 2006, you saw me mad because I knew that it is possible that 15 years later I'm talking to you guys and I haven't won one yet. That's why I was so mad.

“It's a tough place. Last year I had the worst race of my career. Here we are, we can win it. We're going to take it one race at a time. The NTT INDYCAR SERIES is so competitive. Drivers and the teams, everybody is so close. It's easy to go from last to first if you just find that little bit.”

Ryan Hunter-Reay qualified fifth at 230.648 in the No. 28 DHL Honda, with Andretti Autosport teammate James Hinchcliffe sixth at 229.870 in the No. 29 Genesys Honda.

Rookie Alex Palou of Spain ended up a solid seventh at 229.676 in the No. 55 Dale Coyne Racing with Team Goh Honda, with Graham Rahal eighth at 229.380 in the No. 15 United Rentals Honda. 2016 Indy 500 winner Alexander Rossi rounded out the Fast Nine as the fourth Andretti Autosport car in the Shootout, with an average speed of 229.234 in the No. 27 NAPA AUTO PARTS/AutoNation Honda.

The next day of track action will be Miller Lite Carb Day on Friday, Aug. 21, when all 33 drivers will practice for the last time before the race from 11 a.m.-1 p.m. (NBCSN, INDYCAR Pass on NBC Sports Gold, Pennzoil INDYCAR Radio Network).