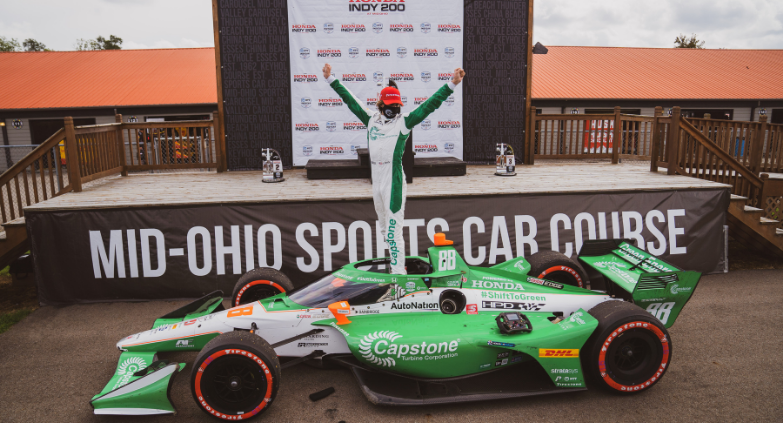 Starting first just like Saturday winner Will Power, Herta, 20, led 57 of 75 laps and finished 1.3826 seconds in his No. 88 Dallara-Honda ahead of teammate Alexander Rossi for the third victory of his career.

“I’m so happy, we’ve been knocking on the door almost every week,” Herta told NBC Sports pit reporter James Hinchcliffe. “We’ve had the pace, but for some reason or another, something has gone wrong. We finally put everything together. Got the pole this morning, had a stellar car, and Honda Andretti 1-2-3.”

In the previous 10 races this season, Andretti Autosport had managed only two podium finishes, both third places by Rossi. Sunday’s trio of podium results marked the first 1-2-3 finish for the team in 15 years since a 1-2-3-4 finish in April 2005 at St. Petersburg, Florida.

“It’s so huge,” team owner Michael Andretti told Hinchcliffe after his team’s 65th IndyCar victory. “Man, 1-2-3, after the way things have been going for us this year. This is huge for us, the whole team.”

Said Rossi after his season-best finish: “I’m just so happy for Andretti Autosport and Michael. It’s been a terrible year for us globally. To do this, huge hats off to Colton and the 88 guys but then to sweep the podium is very cool for us.

“The championship went away from us very early on, so we’re just focused on race wins and really trying to build a good foundation for next year, and we’re doing that now. It’s a step in the right direction. We’ll enjoy this one for sure.”