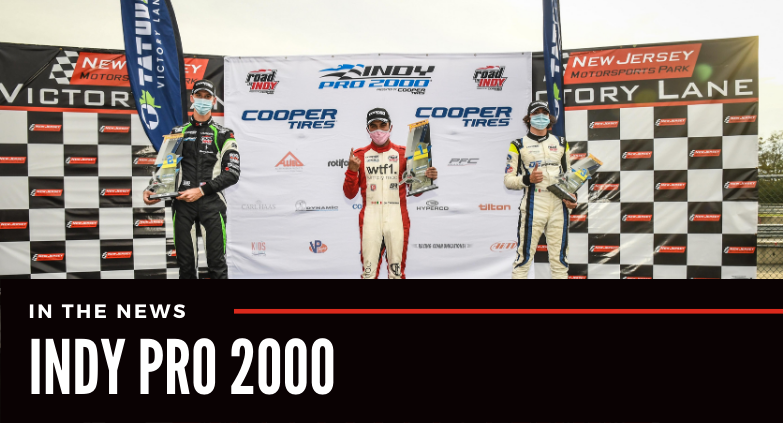 Juncos Racing’s Sting Ray Robb also enjoyed a relatively comfortable ride to second place, now holding a healthy 41-point advantage over DeFrancesco in the Indy Pro 2000 title race with four races remaining this season. At stake is a scholarship valued at over $600,000 for the season champion to graduate onto the final rung of the Road to Indy open-wheel development ladder, Indy Lights, in 2021.

Mexico’s Manuel Sulaiman continued his good form for DEForce Racing to complete the podium in third.

DeFrancesco set the ball rolling this morning in qualifying as he edged Robb by just 0.0087s to snag his third Cooper Tires Pole Award of the year. He took full advantage by making a clean start and was comfortably ahead as the field entered the braking area for Turn 1. DeFrancesco then set a series of fastest laps to extend his margin to over a second in the first five opening laps before settling into a rhythm and eventually taking the checkered flag fully 5.3507 seconds to the good.

DeFrancesco’s performance ensured a second PFC Award of the season for the winning team.

“That was a new situation for us, to be out in front for the entire race, so that was fun,” said the race winner. “It’s a great feeling, after all the hard work that’s gone into this, to see us evolve as a team and get faster and faster through the year. That’s the most satisfying feeling in the world. The test here last month really helped us as a team to find that speed, so I knew we’d have the race pace. We’ll see what we can squeeze out in qualifying tomorrow morning. I know there’s weather coming so there will be a few more spanners in the works. But anything can happen in the championship. I’m here to fight and Sting Ray definitely has a fight on his hands.”