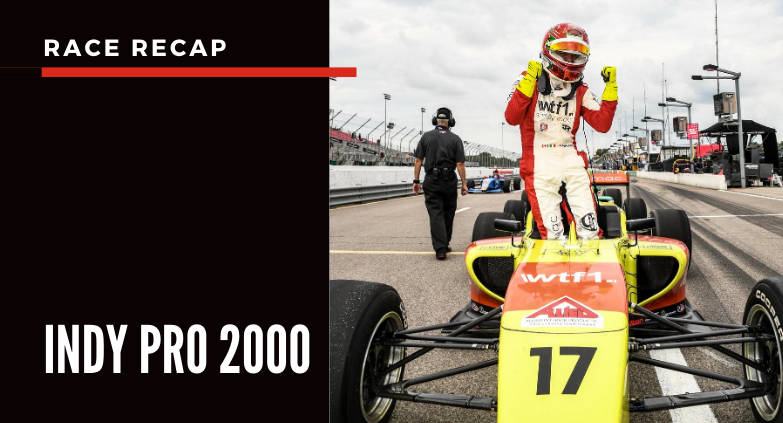 Devlin DeFrancesco has proven to be a quick learner in his rookie season of competition on the Road to Indy Presented by Cooper Tires. Today at World Wide Technology Raceway, the Andretti Steinbrenner Autosport racer drove like a veteran in only his second ever start on an oval, leading throughout the closely contested Indy Pro 2000 Oval Challenge of St. Louis Presented by Cooper Tires.

The 20-year-old Italian-Canadian had to work hard for his laurels, heading an intense four-car battle throughout the 55-lap race. Behind him on the final lap, Braden Eves (Exclusive Autosport) squeezed past Russia’s Artem Petrov to secure second position, with Petrov’s Juncos Racing teammate Sting Ray Robb finishing a close fourth.

After securing the Cooper Tires Pole Award yesterday, DeFrancesco made an exemplary start under cloudy skies to lead the field into Turn 1. Petrov tucked into second ahead of Singaporean Danial Frost (Turn 3 Motorsport), who managed to sneak past Robb. Mexico’s Manuel Sulaiman (DEForce Racing) also made up a position on the opening lap at the expense of Eves, who had started fifth.

Frost was unable to maintain his early pace, soon slipping back to fifth position as DeFrancesco, Petrov, Robb and Eves settled into a rhythm at the head of the field.

DeFrancesco displayed admirable speed and consistency as he fought to keep his position at the head of a frantic four-car train. The leaders were never separated by more than a few car lengths, and, while Eves seemed to have an especially quick car, it took him until Lap 49 to finally find a way past Robb for third.

Next time around the 1.25-mile oval, last year’s Cooper Tires USF2000 champion set the race fastest lap, closing right up on Petrov’s tail. Just when it seemed the Russian would weather the storm, though, Eves swept to the high line entering Turns 3 and 4 on the final lap, driving clear around the outside of Petrov and then winning the drag race to the finish line by less than a tenth of a second.

Just ahead, DeFrancesco posted his fastest lap on the very last lap to secure a magnificent victory ahead of Eves, Petrov and Robb as the quartet were separated by only 1.2527s.

“I haven’t had a win like this in such a long time, and it’s the best feeling in the world!” DeFrancesco exclaimed. “The team has done an unbelievable job. They’ve really gotten me up to speed on the ovals quite quickly – what to look for, what not to look for.

“I’m really enjoying the ovals,” he continued. “We have had a very strong car all week, from the first test on; and I knew we’d be even stronger in the race. We took a gamble after practice with the downforce level and it really paid off; the car was so easy to drive. It’s great to add to the championship lead but honestly, I’m not thinking about the points. We’re just taking it race by race, and this one was extremely satisfying. It’s a great confidence booster.”