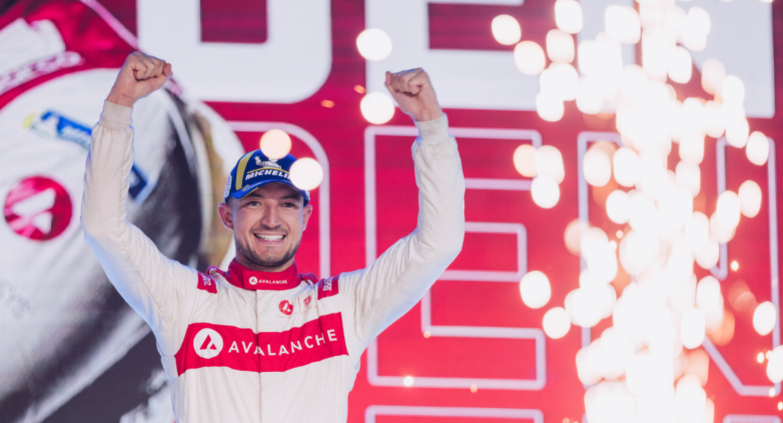 Jake Dennis made it two wins in two seasons on British soil with victory in the SABIC London E-Prix Round 13, and this time around he was able to share it with a passionate home crowd.

Dennis had been the quickest man in Free Practice 2, the Groups qualifying and each of the knockouts on the way to brushing aside standings leader Stoffel Vandoorne (Mercedes-EQ) to pole position. Come the race, he moved across off the line to defend from the fast-starting Belgian alongside and from there, held Vandoorne at relative arms-length, having got the better of rear gunner Nyck de Vries - who Mercedes-EQ would have been planning to employ as a spanner in the works.

"I’m over the moon with how we just won that race the way we did it was very special, said the 27-year-old. "The car was incredible and just a little bit of strategy from my side and the team at the start when Nyck (de Vries) was running third made the difference. I felt Nyck was going to try and help Stoffel a bit so we pushed when we needed to and got the job done.

The precision is the hardest thing to get right. The track’s evolving so much throughout the race and each lap you have to be on your toes and drive to instinct. If you try and plan anything it never turns out like that. Every lap you turn in less and less as the front is working more and more and you need to adjust."

Celebrating that win in front of a passionate British crowd clearly left Dennis on a high after the podium celebrations, with the atmosphere inside the ExCeL bouncing for the Brit. More of the same tomorrow?

"What a great job by everyone in my team – a double points-scoring finish with Oliver (Askew) in there as well. We won on Saturday last year. The best day to win is always Sunday on a double-header but I’ve got another chance to do it all again tomorrow! That experience after the chequered flag with the British fans in there was something else.

"It was one of the best races of my life. With all the lights and the fans, I never expected anything like this - this will be a memory for a lifetime but there's still a job to do tomorrow."