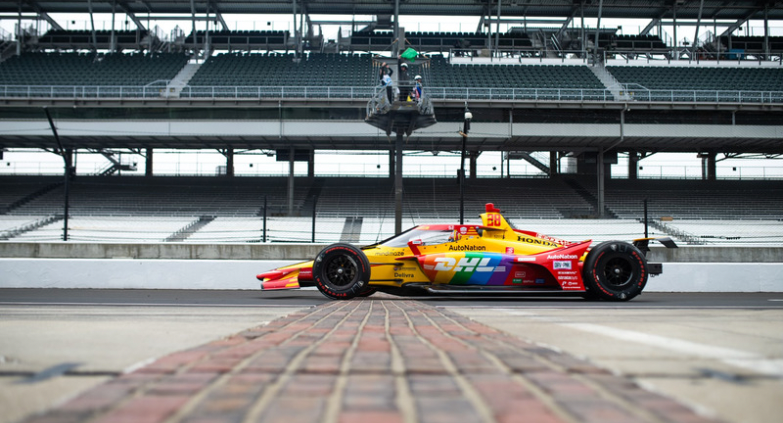 The Andretti Autosport No. 28 DHL Delivered with Pride livery returns to the track, this time at the 106th Running of the Indianapolis 500 presented by Gainbridge with Romain Grosjean behind the wheel. The livery, which showcases a memorable DHL Pride rainbow logo, carries a message of diversity, equity and inclusion, helping to promote a sense of belonging both inside and out of the workplace.


DHL and Andretti Autosport first showcased the pride colors on the No. 28 to celebrate the 2021 June Pride month with races at Detroit’s Belle Isle Park and Road America. This year, DHL and Andretti Autosport will leverage the biggest motorsport event, the Indianapolis 500, to showcase not only the No. 28 pride branded car, but also pride branded merchandise, with the proceeds to benefit and help champion LGBTQ+ issues.


Fans can take a stand with DHL by purchasing replica pride jerseys sold at the official IMS/INDYCAR trackside stores in May as well as on shop.indycar.com, benefiting GLSEN, an educational organization that works to end discrimination, harassment, and bullying based on sexual orientation, gender identity and gender expression. DHL and Andretti Autosport also encourage and support the thousands of students participating in a nationwide day of silence on Friday, April 22 – a GLSEN initiative and national student-led demonstration where LGBTQ+ students and allies take a vow of silence to protest the harmful effects of harassment and discrimination against LGBTQ+ people in schools.


“Common values brought Andretti Autosport and DHL together over a decade ago, and we were reminded of these common values when working together on our Pride initiatives for the “Greatest Spectacle in Racing,” said Christine Nashick, Chief Marketing Officer for DHL Express Americas. “We are excited to utilize the DHL Pride livery to raise awareness of being an ally to the community. Ultimately, we celebrate Pride because we know that creating a culture that is inclusive to all identities depends on all of us to be active allies for the LGBTQ+ community.”


“We’re really proud to stand with DHL and once again bring the Delivered with Pride message to the racetrack” said Andretti Autosport Chairman and CEO, Michael Andretti. “The month of May is the perfect stage to promote diversity and help build a culture of inclusion. We look forward to seeing the DHL Pride livery on track during this week’s test days and again through the Indy 500.”


The Delivered with Pride livery, which kicks off the 2022 Pride campaign, will first be seen in today’s NTT INDYCAR SERIES IMS Open Test, with live U.S. broadcast on Peacock and international streaming via INDYCAR Live! Fans can then support Romain Grosjean during his first Indy 500 when practice begins Tuesday, May 17. The 106thRunning of the Indianapolis 500 presented by Gainbridge takes place Sunday, May 29, with a live broadcast on NBC.