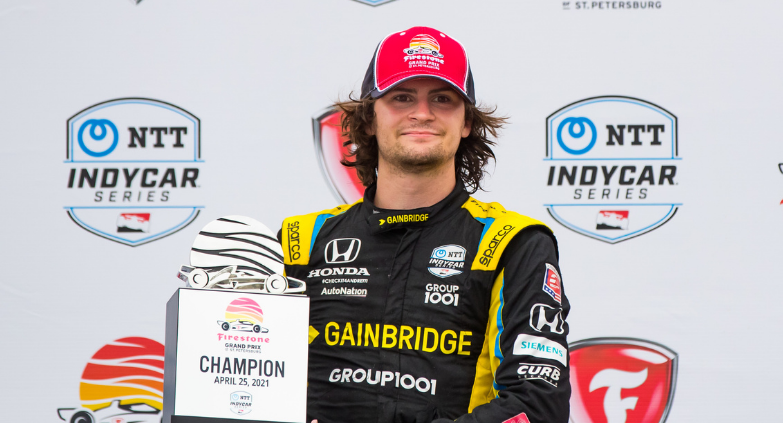 With father and race strategist Bryan Herta in his ear, Colton Herta crossed the finish line first in the No. 26 Gainbridge Honda to win the Firestone Grand Prix of St. Petersburg Sunday on the streets of St. Petersburg, Florida.

“I’m just super proud of him,” Bryan said. “He did such a great job. We had a game plan that we executed really well.”

Immediately in Victory Circle, Colton knew the significance of winning in just his second race with his dad as his race strategist.

“That is awesome,” Colton said. “And I tied him for wins today, too, which is even more special. I love that. I love that he’s on my radio.”

Bryan, who has won two Indianapolis 500s as a team owner with Dan Wheldon in 2011 and Alexander Rossi in 2016, was calm in the closing laps, insisting to NBC as the final restart approached on Lap 83 that he and his son had nothing to worry about.

The pressure on that final run to the checkered flag was immense, however, as Colton held off two-time INDYCAR champion Josef Newgarden. Even with the attack of Newgarden, who won the last two races on the streets of St. Petersburg, both Hertas were calm and cool – a signature of Colton’s off-track demeanor.

Bryan said he was at his most comfortable on the radio with Colton, and he could tell Colton had the same sensation. He was sensing things out of the driver that only a father could. He knew what Colton was feeling, and he knew not to push him as he drove to a 2.4933-second margin of victory.

“We’re just doing our thing,” Bryan said. “When you’re in the moment and in the zone, I feel really comfortable. That’s what I want to be doing, and I know he’s the same. I can hear it in his voice.

“That’s the advantage of being on the radio. We know each other so well that there’s just a lot of unspoken communication. I could tell where he was at. I could tell just by his voice that he felt in control and he felt like he had what he needed, so I was just trying to let him do his thing, and he did it.”

But the moment Colton completed Lap 100 and scored his first win on a street circuit, Bryan transitioned from race strategist to dad, taking in the special win.

Colton, 21, tied a statistic his father achieved at age 35. So, while the talk of the paddock right now is how Colton tied his father’s achievements, pretty soon it will be son topping father.

In fact, he’s already doing so.

Colton’s win extended his winning streak to three straight seasons, something his father never did. Bryan only won in back-to-back seasons in 1998-99, and he never won on a street circuit. His career wins came at WeatherTech Raceway Laguna Seca twice, Kansas Speedway and at Michigan.

When Colton burst into the NTT INDYCAR SERIES from Indy Lights at the season finale in 2018, many fans and observers wanted to know: Who is better, father or son? Bryan admits that these days, that’s not as frequent of a question.

“When he first moved to INDYCAR, people used to ask me if I thought he was better than I was, but nobody asks anymore, and that’s OK,” Bryan said. “I’m cool with that.”