Round 1, Group 1 of qualifying on the streets of St. Petersburg saw Marco Andretti and Alexander Rossi take to the 1.8-mile street course in attempt to advance to fight for the pole position. Unfortunately, Andretti's No. 98 machine came to a stop at the entrance of pit lane after one lap due to a fuel pick up problem, bringing out a red flag. The U.S. Concrete / Curb machine showed strong pace during the practice sessions, but was not able to showcase its speed and fight for the pole position as a second red flag soon ended the session, costing Andretti the chance at recording a qualifying attempt. Rossi, however, posted a quick enough time in the abbreviated session to advance to Round 2.

Ryan Hunter-Reay and Zach Veach made their way onto the 14-turn track for the second group of Round 1 qualifying. With the entire session running under green-flag conditions, the DHL machine advanced to the second round of qualifying, but Veach's sat in seventh when the time expired.

Hunter-Reay joined Rossi for the second round of qualifying where both earned a spot in the Firestone Fast Six. Hunter-Reay, who has a best start of second on the streets of St. Petersburg, snagged the fifth starting position and NAPA Racing driver Alexander Rossi recorded his best grid spot at the Firestone Grand Prix of St. Petersburg with a sixth-place start.

The first race of the season is in the books and Alexander Rossi led the Andretti Autosport team with a top-five finish. Rossi ran a clean, steady race, leading two laps to secure an extra point in the championship chase heading into Round 2 of NTT IndyCar Series competition.

After fighting to overcome the hand delta by qualifying, U.S. Concrete driver Marco Andretti tangled with track debris and was forced to pit off strategy for a flat left front tire. The third-generation driver returned to the track to again fight his way back through the field. Andretti ran as high as second and consistently in the top 10 throughout the 110-lap race, before settling for a 13th-place finish.

Zach Veach ran as high as 10th place mid-race but lost track position following minor contact with the 30 car and was never able to regain ground. The sophomore driver earned his best finish on the streets of St. Petersburg (14th) and looks ahead to a strong weekend at COTA.

Ryan Hunter-Reay's No. 28 DHL Honda showed pace-setting speeds all weekend and secured a solid top-five starting position, but his racing machine suffered a mechanical fate early in the race. After coming to a stop on the front straight, Hunter-Reay brought out the first yellow flag of the 110-lap race, forcing the Florida-native to retire after just 19 laps completed. 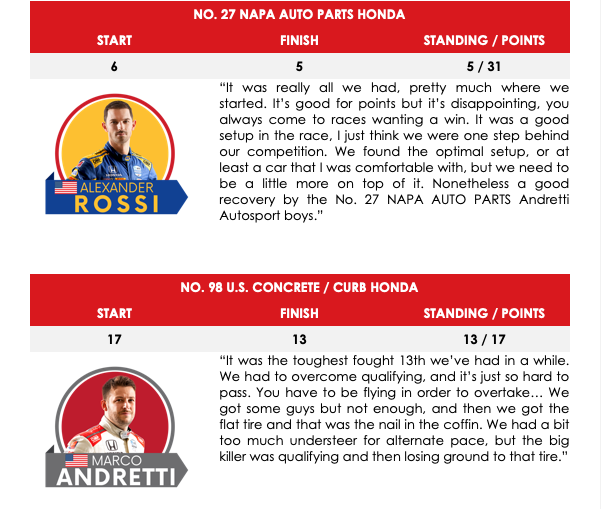 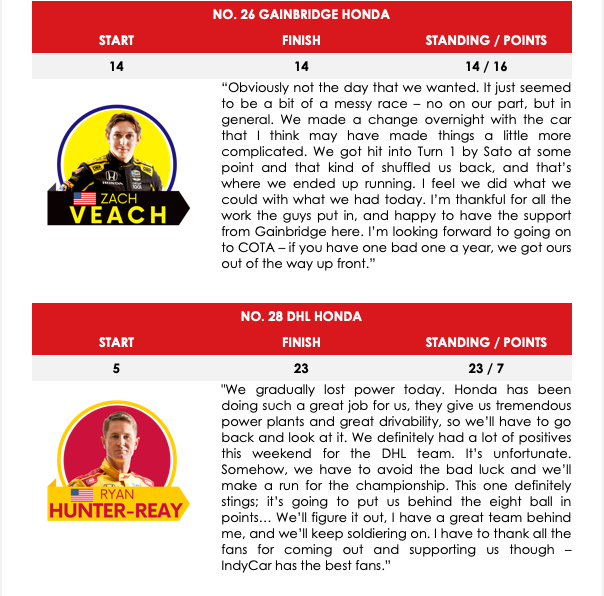