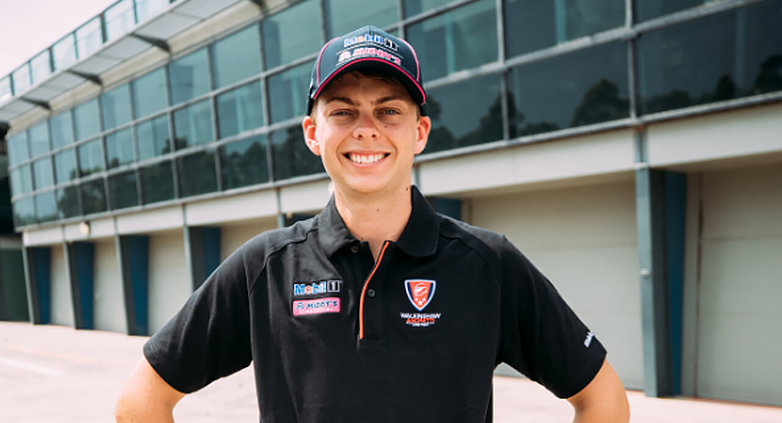 [Melbourne, Australia] Walkinshaw Andretti United has announced that Bryce Fullwood has joined the Team to drive in the Virgin Australia Supercars Championship, beginning in 2020.

Fullwood, 21, who hails from Darwin in the Northern Territory, joins the Team after winning the 2019 Dunlop Super2 Series. He will become the first Territorian to race in the Supercars Championship full time, and the first Darwin native to race in-front of his hometown when the Championship heads to Hidden Valley for the BetEasy Darwin Triple Crown on July 17-19.

He will drive the Mobil 1™ Middy’s Racing Car No. 2 Holden ZB Commodore in his rookie Supercars season, joining Chaz Mostert in the WAU stable.

Middy’s Data & Electrical is Australia’s largest family owned & independent electrical wholesaler, and have been supplying electrical materials to the electrical industry since 1928. Middy’s have 104 branches Nationally which are 100% family owned and operated.

In 2019, he amassed six race wins and four pole positions on his way to the Dunlop Super2 crown with Matt White Motorsport, sealing the win six rounds into the seven-round championship. Proving his speed and consistency, he finished first or second in all bar three races in the year.

He also partnered Andre Heimgartner in the PIRTEK Enduro Cup in 2019, following a year with Todd Hazelwood in 2018.

The former Australian Karting Champion, who also has eight state and territory titles to his name, represented Australia at the Rotax World in Spain in 2014.

The livery of the car will be launched in the coming weeks.

Fullwood will have his first official drive of the Mobil 1 Middy’s Racing Commodore on February 18th at the 2020 Supercars pre-season test at The Bend Motorsport Park, before making his Supercars main-game debut that weekend at the Superloop Adelaide 500.

“I’m really excited to be joining the Walkinshaw Andretti United family for 2020, and can’t wait to get my rookie year under way. It’s a dream come true to join the main series, and something I’ve been working towards for a long time.

“From the moment I walked through the doors at WAU I felt at home, and everyone here has been more than welcoming. There’s no doubt there will be a lot to learn this year, but I’ve definitely got the right people around me, you can tell it’s a family here.

“Now that the news is out there, I can’t wait to jump in the car at The Bend and kick it all off.”

“It’s really exciting to have Bryce join the team for the 2020 season. He’s certainly someone we have watched closely over the recent years, and his outstanding season in 2019 shows the calibre of driver he is.

“It’s definitely going to be an exciting journey, Bryce is an outstanding driver, and person, and we are really excited by what we can achieve together going forward.

“We also welcome Middy’s to our family with open arms, and as always, thank Mobil 1 for their continued and unwavering support.”

“It’s great to have Bryce join the Walkinshaw Andretti United team for his rookie season.

“No one can question the year that he had in 2019, to win the Dunlop Super2 Championship, the Armour All Pole award and do such a great job as co-driver in the enduros is a terrific feat, and we all have been nothing but impressed with everything about him.

“He is the perfect fit for our team, and I can’t wait to watch his career continue to go from strength-to-strength.”

“Bryce is not only a great driver, but a great person, which is why the decision to bring him on-board for 2020 was an easy one.

“While he might have the ‘rookie’ title next to his name, his experience and results said to us that he was more than ready for the next step, and I’m sure he will surprise a few people this season.

“It’s fantastic to have Middy’s join us, as well as the continued support from Mobil 1. 2020 is looking extremely exciting, bring it on.”