GRATEFUL DALY MAKING MOST OF SPEEDY MAY OPPORTUNITY WITH ANDRETTI AUTOSPORT 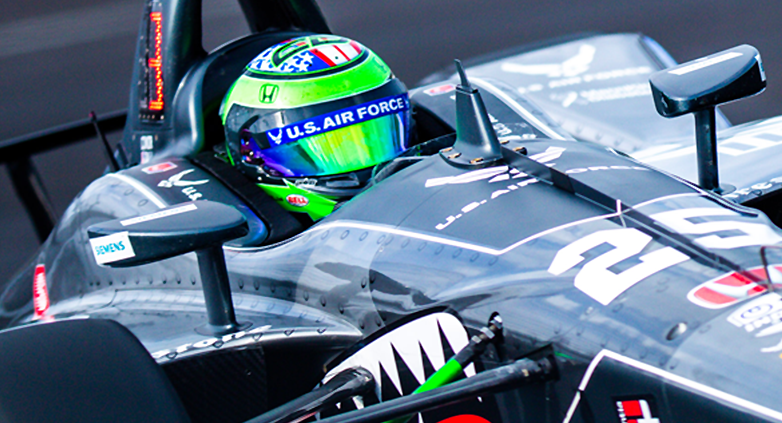 The FaceTime teasing was to be expected from his buddies after Daly turned the fastest overall practice lap of the week at 231.704 mph on Fast Friday for the 103rd Indianapolis 500 presented by Gainbridge.

What made the moment even more surreal, as an excited Daly tried to ignore that buzzing phone and answer questions from reporters, was that he was sitting between racing legends Gil de Ferran and Fernando Alonso.

As a young race fan, Daly took pictures with both — smiling with de Ferran when the Brazilian won the Indy 500 in 2003, then getting a snapshot with two-time Formula One world champion Alonso during the United States Grand Prix weekend in 2005 at Indianapolis Motor Speedway.

All these years later, preparing for his first race of the NTT IndyCar Series season after an agonizingly long wait, that former wide-eyed, picture-seeking kid might have needed to pinch himself to believe this day. Daly will try to win the pole Saturday in his No. 25 United States Air Force Andretti Autosport Honda, a car he’s convinced gives him the best chance to win this race after five humbling starts.

“I mean, honestly, I almost shed a little tear in my helmet at the end there just because my dad and my mom were there, and I love this place,” Daly said. “Heck, I took pictures with Gil when he won when I was an infant it felt like, a very small boy, little pudgy, pre-diabetes, all that stuff, and I took picture with (Alonso) here, too. Geez, wow.”

This was a lot to digest for the 27-year-old driver from Noblesville, Indiana, who last raced full time in 2017. His best result in 42 series starts was a second at Detroit in 2016 for Dale Coyne Racing.

As much as he’s grown up dreaming of Indy 500 glory at Indianapolis Motor Speedway – his stepfather is President Doug Boles – Daly has endured his share of humbling moments in this race. His best finish in five “500” starts was 21st last year with Dale Coyne/Thom Burns Racing. In 2015 with Schmidt Peterson Motorsports, his engine failed on the pace laps, and he didn’t even get to take the green flag.

But now, after all that, he’s with an Andretti Autosport team that has won three of the past five Indy 500s. It’s difficult to choose words with enough depth in meaning to describe how much this moment, this “500” and this opportunity mean to Daly.

“I just love it here, and I've always worked so hard to try and have the best chance that we've had with what I've been driving,” he said. “Definitely have made mistakes here, definitely have had a lot of bad luck here. But I still love it. I love driving every lap, and this week has gone a lot better, I think, than we've shown on the time sheets, and so today was definitely a reward for the guys, really. I think they work so hard – I've done more laps in these last few days than I think I've ever done on practice days, just getting ready.”