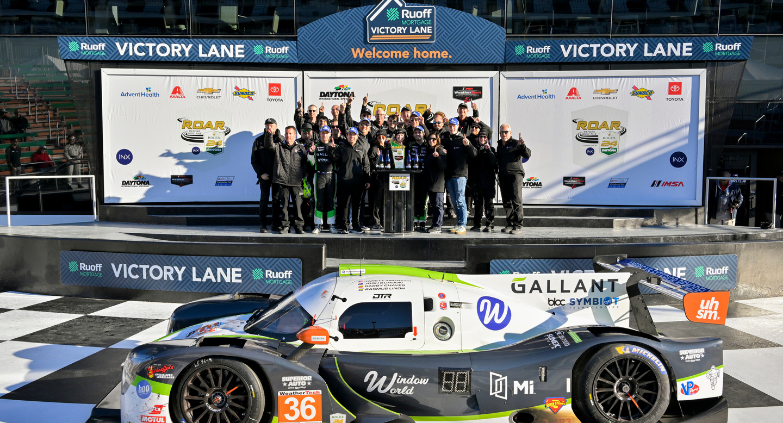 Andretti Autosport is off to a winning start in 2022, thanks to Jarett Andretti and Josh Burdon. But they’re looking at it as just a preview of things to come in the IMSA WeatherTech SportsCar Championship, starting with the biggest North American sports car race of them all.

Andretti and Burdon teamed to win the Le Mans Prototype 3 class in the Rolex 24 Qualifying Race on Sunday at Daytona International Speedway. The result puts the No. 36 Gallant/Window World Ligier JS P320 at the head of the class field for the iconic Rolex 24 At Daytona endurance race that rolls off this Saturday.

The result was a massive step for the Andretti Autosport program, spearheaded by Jarett and starting just its second season in IMSA competition. It began last year with the team competing in a pair of races in the IMSA Prototype Challenge LMP3 development series before the decision was made mid-season to move up to IMSA’s top-tier series, the WeatherTech Championship, for the final five LMP3 events on that schedule.

The No. 36 LMP3 will run the entire 2022 season in the WeatherTech Championship, which means for the first time ever, there is an Andretti Autosport entry in the world-famous Rolex 24 At Daytona.

“I’m really excited to be part of that first entry and hopefully we can have a 1-for-1 batting average when we leave here next week,” a smiling Jarett said after Sunday’s triumph in the qualifying race. He and Burdon will share the car with Rasmus Lindh and Gabby Chaves in the grueling 24-hour race on Daytona’s 3.56-mile road course, each driver bringing vital experience racing high-downforce prototypes to the effort.

Jarett is brimming with confidence heading into the big race. Not only because of Sunday’s win, but more so because the team has a full year’s understanding how to operate the program as opposed to 2021 when it was cobbled together shortly before the season began.

“We not only had to get staffed up and stocked up to be a WeatherTech team, but we also had to learn all the LMP3 stuff, what it takes to make the car last while also taking in all the new stuff with the car,” he recalled of last season. “It was a big learning curve and also a big learning curve as far as the driving because I was last in a GT4 car and before that a sprint car. So, it was moving into a downforce prototype, the endurance racing and the multiclass racing, something that was so different.”

The team managed a pair of fourth-place finishes as season bests. Burdon joined the team for the 2021 season finale, the Motul Petit Le Mans, but the day ended early in the 10-hour race due to mechanical issues. The 29-year-old from Tasmania is honored to carry on the Andretti racing heritage for the full campaign in ’22.

“It’s a privilege for me,” Burdon said. “I come from very humble beginnings and to drive for a name like Andretti alongside Jarett is something that I’m very proud of.”

Jarett is equally proud because it also carries on the legacy of his father, John, who helped guide Jarett’s racing career before John passed away from colon cancer two years ago. Father and son, in fact, drove together in the 2012 Rolex 24 – the 50th running of the celebrated event – in John’s final professional race. A decade later, the 60th running will conclude two years to the day after John’s passing.

“When you think about the biggest races in the world, you can ask anybody in the world and the Rolex is always in everybody’s top 10 or top five or top three,” Jarett said. “When you have something that’s worldwide renowned like that, you know it’s a special event.

“I got to do the 50th with my father and it’s taken me 10 years to get back,” he added. “There’s a lot of good feelings when you come back to Daytona.”