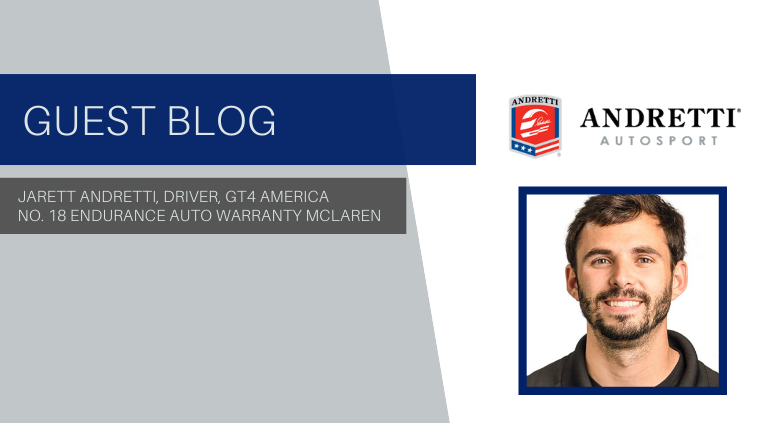 When I’m not behind the wheel of my GT4 McLaren racing for Andretti Autosport, you will probably find me at a dirt track running my own sprint cars. For the past couple years, I’ve been used to racing every weekend from March until October, so this has been a very odd year so far – historic times and very unfortunate for so many people. There isn’t anything I can say that hasn’t already been said before, I am just praying that all of this ends soon, and we are able to get back to normal as soon as possible… whatever that new normal looks like.

I have been in North Carolina with my mom and sister (Amelia) quarantining since coming home early from St. Petersburg in mid-March. We have made the most of our time, I have been putting Amelia to work helping me clean out our shop/storage unit! I’m very proud of how it looks at the moment. You see, cleaning it out was something I promised Dad I would do, so I am glad to have it completed and promise kept. I think he’d mostly be pretty pleased with how it turned out – although I also think I should maybe mop the floors just one more time, just to be safe.

We are also lucky enough to have a small gym at the house, so I have been working to stay in shape and be ready for whenever the season starts back up!

Racing (like every other profession) is full of ups and downs, but there are a couple stories that, to me, really stand out:

I started racing late in life by most modern-day standards, I was 17, about 18, to be exact and Dad had bought a go-kart for himself. He was out running one time and I went to watch; I went to help him lift it on the stand and it was a sealed fate from there. Pretty soon he wasn’t getting to drive his own kart and he was my full-time mechanic! He used to joke with me, “I bought a go-kart to come off the road – now I’m on the road more than ever and not making any money!” I enjoyed driving the kart, but I wasn’t totally hooked. There was a race and we were like “well, let’s try it!” Dad had me start last and by Turn 3 I had already elbowed my way past a couple guys and spun someone. I felt so bad. Dad was always a really clean racer and I thought he would have scolded me for turning someone, on the first lap nonetheless! I pulled in and was greeted with the biggest smile, “That’s how you do it,” he said, “if they are going slow get them out of the way!” I was hooked, I dropped everything else and started racing. From that moment forward my life was never the same.

With that being a high, a low has to be Millstream in 2016. Now that I look back on it, I laugh, but at the time it was NOT funny! It was a Sunday night race and it paid pretty good, so we decided to go. Schaeffer Oil was the sponsor and we put a brand-new body on the car, and it looked beautiful. We were all excited to get to a new place. We unloaded, won the heat and started on the pole for the feature. We were pretty tight and fell back to third early. As it slicked off, we started to close back in, and we snagged second with 10 laps to go and were catching the leader. The cushion was packed against the wall and it was pretty thin, I went just a bit too hard and hit the wall. If I would have lifted and settled the car back down, I wouldn’t have caused any damage and ended up second. Instead, I didn’t lift. I tried to drive down off the wall to preserve what little hope I had to win that night. That only made it worse (way worse) and I flipped end-over-end, tearing up our brand-new body and destroying Dad’s new decal wrap! The car came in on the hook and was beat up pretty bad. “You have to lift when you hit the fence!!!!” Dad yelled at me. It was embarrassing and I went from possible hero to true zero in about 30 feet. To add insult to injury, we had a 4-hour drive home. We got back to the shop and we were all so wound up we stripped the car and I took it to the chassis shop at about 5 a.m. Luckily for me, Longs Donuts was open so I got a stack of donuts along with some milk and waited in the parking lot of DRC Chassis on Gasoline Alley. Unfortunately, as tired as I was Gasoline Alley was a bit of a scary place, I had to stay alert and awake until the sun came up! They fixed the chassis and we won the track championship at Lawrenceburg the next weekend. But from that point forward…I lifted when I hit the fence!