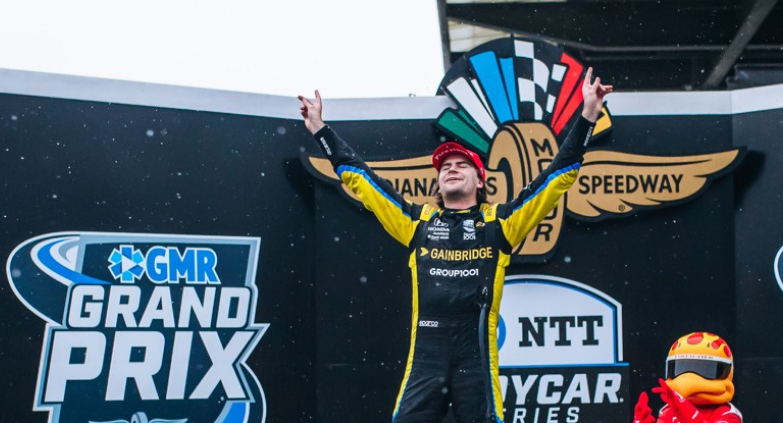 Colton Herta won one of the wildest races in recent NTT INDYCAR SERIES history, controlling the chaos of changing weather conditions, ever-evolving tire strategies and numerous incidents to take the checkered flag for the GMR Grand Prix on Saturday on the Indianapolis Motor Speedway road course.

Herta, from Valencia, California, earned his first NTT INDYCAR SERIES victory of the season and his seventh career win in the No. 26 Gainbridge Honda after starting 14th. The win was the first of the season for a Honda-powered driver.

The race, originally scheduled for 85 laps but slowed by numerous incidents and the arrival of rain near the midway point, reached its two-hour time limit during a caution period.

“This is the hardest race I think I’ve ever done,” Herta said. “Wet to dry, dry back to wet. Thank you so much for the Hoosiers for sticking around. I know you’re used to this weather, so thank you very much. Love you guys.”

Simon Pagenaud climbed from the 20th starting position to finish a season-best second in the No. 60 AutoNation/SiriusXM Honda. NTT P1 Award winner Will Power placed third in the No. 12 Verizon Team Penske Chevrolet, tying his season best and climbing into the series points lead.

Marcus Ericsson drove from 18th at the start to end up fourth in the No. 8 Huski Chocolate Chip Ganassi Racing Honda, with Indianapolis native Conor Daly finishing a season-best fifth in the No. 20 BitNile Chevrolet.

“I’ve never been in a race like that in my life,” Daly said. “That was the craziest thing I’ve ever experienced.”

The box score indicated there were 10 lead changes among six drivers and eight caution periods for 31 laps, but that doesn’t begin to describe what unfolded on the 14-turn, 2.439-mile road course. This was a test of speed, strategy and survival that will live in the memory for a long time.

Rain sprinkles caused the race start to be declared wet, with all drivers on Firestone grooved tires. But it took Herta and Takuma Sato only two laps to realize there was enough traction to switch to the slick, grippy Firestone alternate “red” tires. The rest of the field quickly followed suit, with all 27 drivers changing to alternate slicks by Lap 5.

For the next 30 laps, this appeared to be a highly competitive but conventional NTT INDYCAR SERIES road course race, with three incidents triggering caution periods and mixing up the running order. But the strategic mind games began when Dalton Kellett spun off course in Turn 6 on Lap 36 in the No. 4 K-LINE/AJ FOYT RACING Chevrolet.

Leaden, threatening clouds approached IMS from the west, with the airwaves between pit boxes and drivers crackling with strategic chatter.

Rookie Devlin DeFrancesco, Alexander Rossi and reigning series champion Alex Palou decided to pit for Firestone rain tires during that caution as light rain began to fall to varying degrees in different locations of the massive facility, with a handful of others following suit to switch to rain tires during another caution that started on Lap 42.

This dice roll came up snake eyes because the rain began to let up on Lap 45, when Herta passed Ericsson for the lead in Turn 4.

By Lap 52, the rain began to fall again at varying levels around the track, creating more head games for teams and drivers. During a caution period on Lap 60 with intermittent rain falling, all the contending cars came to the pits for Firestone alternate slick tires.

Two laps later, those plans became a soggy mess when hard rain began to fall. All the contenders tiptoed back to the pits for Firestone rain tires except for Pato O’Ward, Scott McLaughlin and Romain Grosjean, who stayed out on alternate slicks.

The race restarted at the end of Lap 66, and Herta – on rain tires – easily devoured the slick-shod O’Ward to take the lead for good with an inside pass into Turn 1 after the field took the green.

Later that lap, the daring strategy of staying on slicks unraveled for McLaughlin. Struggling for grip, he spun in his No. 3 Snap-on Tools Chevrolet. O’Ward also spun out of second place on Lap 69 in his No. 5 Arrow McLaren SP.

Herta gradually pulled away from Pagenaud over the closing laps, as teams kept their eyes on the race clock and the skies. Herta led Pagenaud by 3.8256 seconds on Lap 72, and the race effectively ended when Juan Pablo Montoya went off course after making contact with the wall in his No. 6 Arrow McLaren SP Chevrolet.

“It was treacherous at the end,” Pagenaud said. “You’ve got to say congrats to Colton because it was really tough to finish the race. We made the right calls on the tires. It was tricky. It was really tricky to decide.”