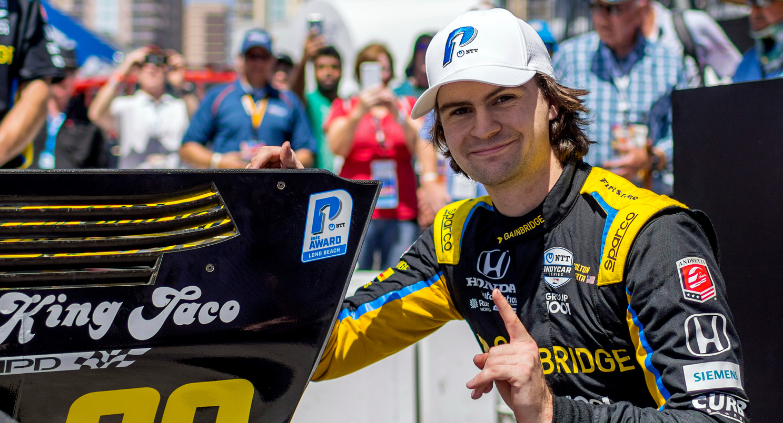 Colton Herta pulverized the track record by nearly a second to win the NTT P1 Award for the Acura Grand Prix of Long Beach on Saturday, leading three Andretti Autosport cars in the Firestone Fast Six.

Southern California native Herta’s top lap was 1 minute, 5.3095 in the No. 26 Gainbridge Honda to earn his first pole of the season and eighth of his career. That lap crushed the track record of 1:06.2254 set by Helio Castroneves in April 2017, as air temperatures were about 20 degrees cooler than the infernal high 90s during practice Friday.

“As a young kid, I always dreamed of becoming an INDYCAR driver, and that was because of this race,” said Herta, 22. “To get the win last year was amazing, and we checked another box with the pole. It feels incredible.”


Herta will look to continue his mastery of recent NTT INDYCAR SERIES races in the Golden State with a fourth consecutive win in California on Sunday. He won last September at Long Beach and WeatherTech Raceway Laguna Seca in Monterey, and he also finished the 2019 season with a victory at Laguna. The series didn’t race in California in 2020 due to the COVID-19 pandemic.


Live coverage of the 85-lap race starts at 3 p.m. (ET) Sunday on NBC, Peacock Premium and the INDYCAR Radio Network.


Josef Newgarden will join Herta in the front row after his top lap of 1:05.7550 in the No. 2 Hitachi Team Penske Chevrolet.


Reigning series champion Alex Palou, who clinched his first title last September at this race, will start third after a best lap of 1:05.8667 in the No. 10 NTT DATA Chip Ganassi Racing Honda. Felix Rosenqvist qualified fourth at 1:05.9349 in the No. 7 Vuse Arrow McLaren SP Chevrolet.


Two-time Long Beach race winner Alexander Rossi was the second-quickest Andretti Autosport car in qualifying at 1:06.0674 and will start fifth in the No. 27 NAPA AUTO PARTS/AutoNation Honda. His Andretti teammate Romain Grosjean will join him in Row 3, starting sixth in the No. 28 DHL Honda.


Frenchman Grosjean appeared to be headed for a front-row start, turning the second-quickest lap of the Firestone Fast Six on his penultimate flying lap. But he speared his car into the tire barrier in Turn 5 with two seconds remaining in the session and lost his two quickest laps of the session for causing a red flag during qualifying, per INDYCAR rules.


But the rulebook also states drivers are entitled to six minutes of green-flag time during the Firestone Fast Six, and there were two seconds left on the clock when Grosjean crashed. So, drivers had the option to complete one more flying lap to attempt to topple Herta.