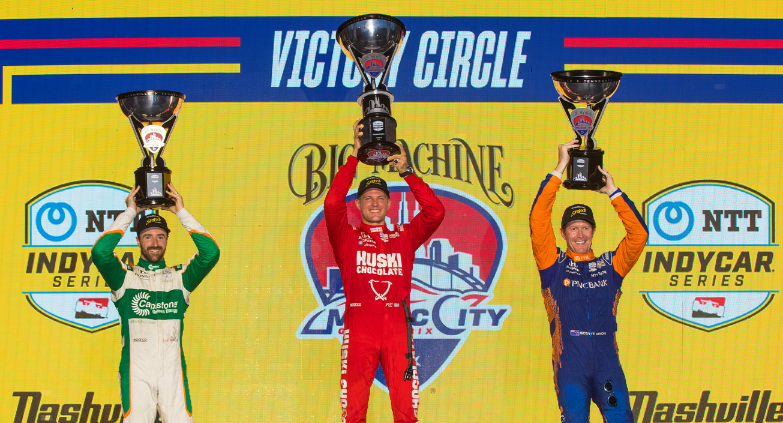 In a season full of misfortune and challenging drives for James Hinchcliffe, the Big Machine Music City Grand Prix proved to be a welcome change of pace during the 2021 NTT INDYCAR SERIES season. Until it almost wasn’t.

The third-place finish was his first podium since finishing third at Iowa Speedway in 2019, and it was a marked improvement from his previous best finish of the season: 14th at Belle Isle-2.

“For us in the No. 29 car, it’s been a rough season,” Hinchcliffe said. “We’ve had our own troubles, but we’ve also had a lot of bad luck … We had a great car. The Andretti Steinbrenner Autosport guys in the pits were awesome. We were at the back, front, kind of ran a little bit of everywhere today.”

Hinchcliffe showed promising speed over the weekend in practice, and he proved his competitiveness with a 10th-place qualifying effort Saturday. When the race started, Hinchcliffe hovered in the top 10 for the opening laps.

But a logjam in Turn 11 on Lap 20 nearly erased his strong start and threatened to prevent him from having a strong showing yet again in 2021.

The incident stopped 10 other cars on the racetrack, with most of them stalling or unable to get through the blocked racetrack, including Hinchcliffe in his green-and-white Honda.

Canadian Hinchcliffe said he expected the race to remain under yellow flag conditions while the corner was cleared, forcing him to fall several laps down as he waited for his car to be restarted. Luckily for Hinchcliffe, the race was red-flagged, which meant he stayed on the lead lap when he resumed racing.

Hinchcliffe said it was a relief that, for what felt like the first time this season, good luck came his way instead of bad luck.

“Honestly, what saved us is going red,” he said. “As much as we hate that happening, I thought they were going to drive the field through pit lane until we cleared the traffic jam, and we were going to be three, four laps down and kind of out of it.

“Credit to INDYCAR for not eliminating all eight of us, whatever it was, that were stuck back there. We had no damage. We avoided all the carnage. The traffic just blocked.”

Once the race resumed, Hinchcliffe was 13th on the leaderboard, and the charge to the front was on. By Lap 70 of the 80-lap race, Hinchcliffe found himself fourth. Then, Andretti Autosport teammate Colton Herta crashed while running second with six laps remaining and elevated Hinchcliffe to third, where he would stay on the final restart with two laps to go after holding off 2012 NTT INDYCAR SERIES champion Hunter-Reay.

Hinchcliffe believes Sunday’s performance is proof of a late-season charge he and the No. 29 team are building. He had his best qualifying result of the season, ninth, in the previous NTT INDYCAR SERIES race at Mid-Ohio Sports Car Course, and the Turn 1 accident at the beginning of that race July 4 derailed what he expected was going to be a solid day. He finished 17th.

Add that to his best performance of the season, on top of Andretti Autosport’s all-around strong weekend in Nashville, and Hinchcliffe is hopeful that this is the start of a strong end of the season.

“As the saying goes, you’re only as good as your last race,” Hinchcliffe said. “We’ve been finding some pace in qualifying the last couple events. It was nice to have nothing, well I am not going to say nothing because something went wrong, but then something went right.

“Mid-Ohio sort of ended before it started for us. I think the team is doing a great job. I think we’re really jelling at the moment. We’ve had a few good ones in a row. We got a couple tracks coming up that we really enjoy. Hopefully this is some momentum that we can carry through the last five races of the year.”

Next up for Hinchcliffe and the rest of the NTT INDYCAR SERIES athletes is the Big Machine Spiked Coolers Grand Prix on the Indianapolis Motor Speedway road course at 12:30 p.m. (ET) this Saturday, Aug. 14 (live on NBCSN and INDYCAR Radio Network).

It’s the second race of a six race stretch to end the season, culminating in the Acura Grand Prix of Long Beach on at 3:30 p.m. (ET) Sunday, Sept. 26 (live on NBCSN).

It will be a grueling stretch toward the Astor Cup, but as Hinchcliffe alluded, he is looking forward to the IMS road course, where he has a career best finish of third in 2016, as well as the season finale at Long Beach, where he won in 2017.