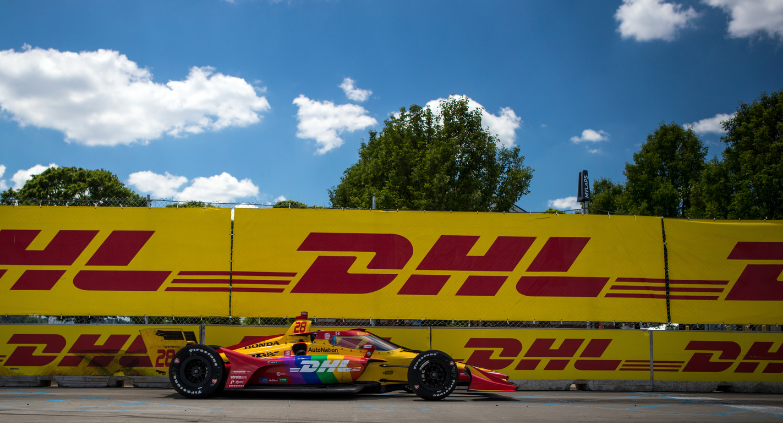 A number of initiatives have been seen throughout the years promoting and supporting ethnic and gender diversity in high-level professional motor racing, but similar support has been routinely lacking for the LBGTQ+ community.

In a first-known program of its kind in the NTT IndyCar Series, Andretti Autosport and sponsor DHL have come together to support Pride Month with Ryan Hunter-Reay’s No. 28 Honda

Adorned with the rainbow flag on its sidepods and a second representation of the multi-color banner on his aeroscreen’s tear-offs, the 2014 Indy 500 winner’s car will carry the livery throughout June, starting with this weekend’s Dual In Detroit and finish with next weekend’s race at Road America in Wisconsin.

“I’m all for supporting everyone,” Hunter-Reay told RACER. “I absolutely support DHL’s initiative on equal rights for every person, and I’ve had the opportunity to meet a lot of DHL associates throughout the world — Japan, Australia, Brazil, and all across North America — and they are represented by people of every size, color, every race, and orientation. And that type of inclusiveness is something I know I’m proud to represent with this car.”

While some reactions to the car and its pro-LBGTQ+ message were met with criticism on social media, the outpouring of appreciation from gay, lesbian, bisexual and transgender fans has been notable.

“I started my day meeting DHL associates here in Michigan right by the Detroit airport, and the response has been really great,” Hunter-Reay said. “Just the look of the car, too, has been something a lot of people have commented on. You wouldn’t necessarily think a red and yellow car would change so much by putting rainbows on it, but it’s pretty amazing to look and I know it’s drawing the right attention we were hoping for.”