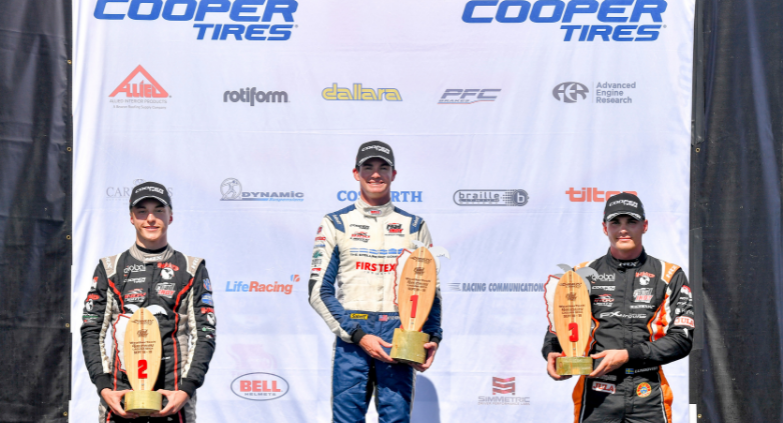 Kirkwood, who convincingly won the Cooper Tires USF2000 Championship in 2018 and added the Indy Pro 2000 Championship Presented by Cooper Tires crown one year later, now holds a handy 15-point margin over David Malukas (HMD Motorsports) in his quest to become the first driver to claim all three Road to Indy titles. At stake this year is a scholarship valued at $1.3 million to guarantee entry into a minimum of three NTT IndyCar Series races in 2022, including the Indianapolis 500.

Kirkwood set up his emphatic performance by snaring his sixth Cooper Tires Pole Award during qualifying on Saturday morning. After entering the weekend with a five-point deficit to Malukas, Kirkwood accelerated cleanly into the lead at the start and simply drove away into the distance.

He completed the first lap around the challenging 2.238-mile road course an astonishing 1.8 seconds clear of his nearest rival, Malukas, then hammered home his mastery by extending his advantage on every lap except the final one before taking the checkered flag some 26.0555s clear. It was one of the most dominant drives in Indy Lights history dating back to 1986.

“This was one weekend where there were so many uncertainties coming in, and it turned out to be our best weekend of the entire season,” said Kirkwood. “It’s super important to get back into the lead, especially going into Mid-Ohio, a track that we’re very confident at. We’ll soak this one in, this was crucial.

“We didn’t sit comfortably overnight. We made a lot of changes on the car. It’s important for the team — they’ll be coming here for years to come so they know how the car adapts through the sessions. We just kept getting the car better and better. We had a really good race car and as the race went on, the car and the tires stayed with us. We had the car this weekend; we were the guys to beat. Andretti hasn’t been super strong here in the past but in testing earlier this year, we really found something and that showed today.

“But there’s no sense of relief or confidence regarding the championship. HMD was fast toward the end of the weekend there earlier this year and it’s another track where passing is tough so qualifying will be everything. I expect HMD to keep catching up quickly and I know they’ll keep after it.”
Read More...