JAMES HINCHCLIFFE TO PILOT NO. 29 GENESYS HONDA FOR 2021 INDYCAR SEASON 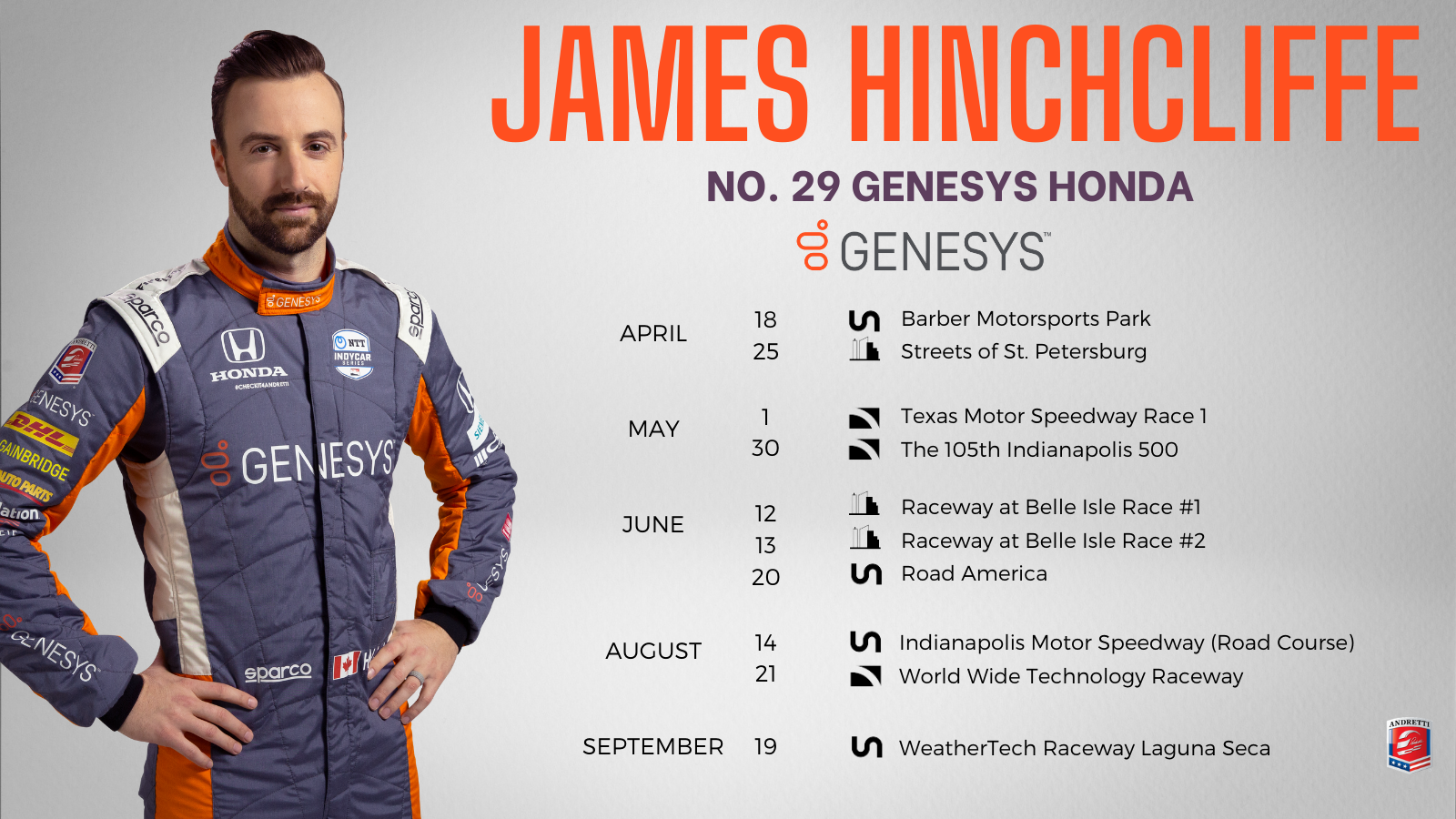 NTT INDYCAR SERIES fan favorite, James Hinchcliffe will be back with Andretti Autosport in the No. 29 Honda. Hinchcliffe will be sporting the Genesys orange for 10 races throughout the 2021 season, including the 105th Running of the Indianapolis 500.

“We’re really excited to have Hinch back in the car for 2021 and thrilled to welcome Genesys again to the Andretti family, this year in an expanded role,” said Andretti Autosport Chairman & CEO Michael Andretti. “This is just the first step in many exciting things for the No. 29 and we know Genesys will be a great partner serving as the cornerstone to the season for James.”

“We’re building upon our tremendous partnership with James Hinchcliffe and Andretti Autosport. The success we have seen together goes beyond the deep connection Genesys has with the Indianapolis community,” said Tony Bates, CEO of Genesys. “James and the entire Andretti team are leaders on the track because they’re empowered with the right technology and data so they can make informed decisions at the right moment. That’s at the heart of every winning customer experience too, and what’s driving our momentum at Genesys.”

The 2021 season will be Hinchcliffe’s 11th year competing in the NTT INDYCAR SERIES, and his fifth in the Andretti Autosport stable. Accepting every challenge, he was one of the four Andretti Autosport entries to land in the Firestone Fast 9 during qualifying for the 104th Running of the Indianapolis 500, with no pre-season testing due to the Coronavirus pandemic.

“This program is something we’ve been working on since the day we signed our three-race deal with Andretti Autosport last March! Being back full time has always been the goal and it feels so great to know that I will be back on the grid and with such an amazing team, one I’ve had a lot of great memories and success with,” said James Hinchcliffe. “So many people at Genesys worked hard to get this done, and I am looking forward to representing them this year. Everyone at Honda, Don and Tom from Spire Sports, Michael, JF, Doug and the whole Andretti group, and everyone that has worked so hard to make this all come together. Even though it’s been a long road, the real work starts now, and I can’t wait to get to the track and kick off 2021.”

Hinchcliffe and his No. 29 become the fourth full-season entry in the Andretti Autosport 2021 fleet, joining already announced drivers Colton Herta (No. 26 Gainbridge Honda), Alexander Rossi (No. 27 NAPA AUTO PARTS / AutoNation Honda) and Ryan Hunter-Reay (No. 28 DHL Honda). Additionally, veteran racer Marco Andretti has been announced to join the lineup Memorial Day weekend for the Indy 500. Remaining partnerships for the Canadian driver’s 2021 season will be announced in the coming weeks.

Watch the 2021 NTT INDYCAR SERIES get underway at Barber Motorsports Park on April 18 in Birmingham, Alabama, live on NBC.