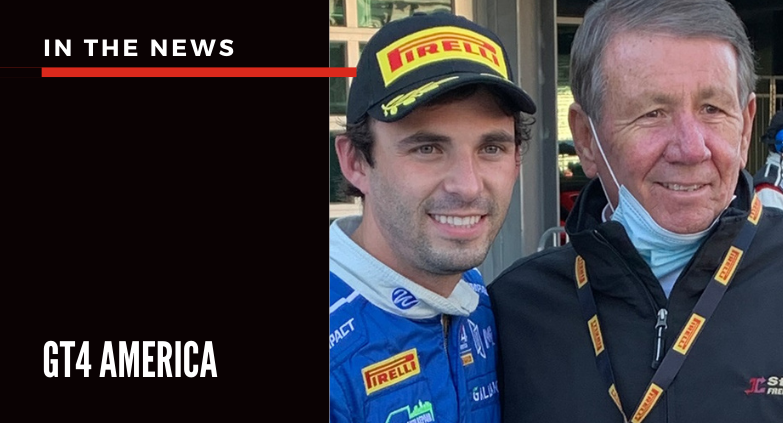 Sometimes, a moment in racing is almost too good to be true.

Such an instance occurred Friday on the Indianapolis Motor Speedway road course, when Jarett Andretti, the son of Indianapolis natives John and Nancy Andretti, captured his first sports car season championship with his grandparents, Aldo and Corky Andretti, watching from the Turn 2 suites. Most of the rest of his family and the family’s race team, Andretti Autosport, cheered from the same pit road where six weeks ago Jarett’s cousin, Marco, won the pole for the 104th Indianapolis 500 presented by Gainbridge.

Only having Jarett’s father, John, who lost his courageous battle with colon cancer Jan. 30, present would have had made it better.

Jarett, who lives a short distance from IMS, was just as pleased with how the car, a No. 36 McLaren 570S, looked as it sat beneath the victory podium. Window World, which sponsors the car as it often did his father’s, agreed to let this livery shine in the Petty blue that John used in three Indianapolis 500s (2009-2011). Andretti Autosport even put John’s name above the passenger’s door to symbolize John riding with Jarett on this special weekend.

“I don’t really know how to put this into words,” said Jarett, whose only other IMS race was in Indy Lights in 2019 when he finished sixth in the Freedom 100. “Just getting to drive this car with his name on the passenger’s door and the scheme that I remember coming here to watch him run, how much he put into this program in the last year, it means a lot to me.

“This place has been so good to our family but also at times so cruel, and I think to win it here means more than it would have elsewhere. So many people who have supported me throughout my career, the whole team is here, so much family that otherwise wouldn’t have gotten to see this. To do it with all the Andretti (Autosport) guys that I see day in, day out – it means a lot to me.”

Surprisingly, Jarett wasn’t as emotional as he has been in other defining moments in his life, but he had an explanation for it.

“I always got more emotional when I saw my dad’s emotions, and obviously I don’t get to see that anymore,” he said. “But it’s nice to get (the championship), nice to get it in SprintX, at Indianapolis, in dad’s livery and with so many of my family and friends here, to stay in your house and not even get on a highway to come to the racetrack you’re racing at -- it’s kind of a storybook ending, if you can say that.”