KIRKWOOD DOUBLES UP AT DETROIT IN INDY LIGHTS 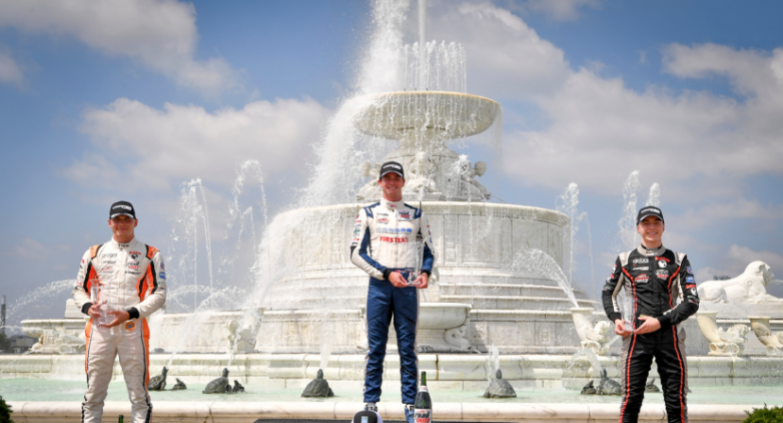 Swedish polesitter Linus Lundqvist (Global Racing Group with HMD Motorsports) had to be content with second after losing out to Kirkwood at the start, although second place still was enough to vault him into a scant one-point lead in the championship over HMD Motorsports teammate David Malukas.

Malukas continued his strong fight-back following a crash early in practice on Friday by finishing third, while Kirkwood’s third victory of the season moved him to within four points of Lundqvist.

Qualifying for the eighth round of the 20-race season yesterday morning had been brought to a premature conclusion following a single-car incident involving Devlin DeFrancesco (Andretti Steinbrenner Autosport), which assured Lundqvist of his third Cooper Tires Pole Award. Malukas, also a three-time pole winner, lined up second ahead of Kirkwood, who had been on a quick lap when the red flags were displayed.

Undeterred, an aggressive start by Kirkwood saw him sweep inside Malukas for second place on the entry to Turn 1. Then, halfway around the second lap on the extremely bumpy and challenging 2.35-mile The Raceway on Belle Isle Park circuit, Kirkwood drew alongside Lundqvist on the back straightaway before grasping the lead before the right-handed entry to Turn 7. It was a bold maneuver which ultimately proved decisive.

The three leaders had distanced themselves from the rest of the field in the early stages, but their advantage instantly disappeared after seven laps due to a full-course caution when Carlin’s Australian charge, Alex Peroni, found the tire wall in Turn 3 while attempting to pass Robert Megennis (Andretti Autosport) for seventh.

Kirkwood once again asserted his superiority at the restart, posting a series of fastest laps to extend his lead to 2.4 seconds with less than 10 laps remaining. Behind, the battle for second continued with unabated intensity as Lundqvist, Malukas and Englishman Toby Sowery (Juncos Racing), who had moved expertly from sixth on the grid, jockeyed for position.

There was one more sting in the tail when the yellow flags flew again with four laps remaining after Danial Frost (Andretti Autosport) was caught out by the bumps in Turn 11 and made heavy contact with the retaining barriers while running fifth.

The cleanup left time for just a one-lap dash for the checkers, and while Lundqvist attempted to make a move on Kirkwood into Turn 1 as the green flags waved, the Jupiter, Fla., native was up to the challenge, maintaining his lead and eventually crossing the finish line just over one second clear of the Swede.

“The goal was to get behind David in the first corner — the marbles are bad offline so I knew that if I got my nose under him, he would be in the marbles,” said Kirkwood. “That was crucial for the win, with David and again with Linus. It’s extremely important to have gotten both these wins this weekend.

“We came into this weekend knowing we’d be strong and we kept that momentum. I wish we’d gotten that second pole, but to get the two wins is fantastic. We know how hard it is to pass, everyone is just so close, so to get the win from third shows how strong we are. We started the weekend 27 points down so to be four points out is a good result. But this track has been phenomenal: I really like street courses, it reminds me of my karting days where you’re up against the wall, it’s really bumpy, and you just have to drive what you have.”

Malukas and Sowery followed close behind in third and fourth, with Malukas gaining some consolation for losing his championship lead by earlier posting a new Indy Lights lap record of 1m21.4559s.

Frost’s late mistake allowed DeFrancesco to move into fifth, capping a fine charge from ninth on the grid, although it wasn’t enough to prevent Carlin rookie Christian Bogle, from Covington, La., from securing his second Tilton Hard Charger Award of the year after starting in 12th and finishing a season-best seventh. Bogle’s effort was especially meritorious given that he had overtaken three cars following a quick spin earlier in the race.