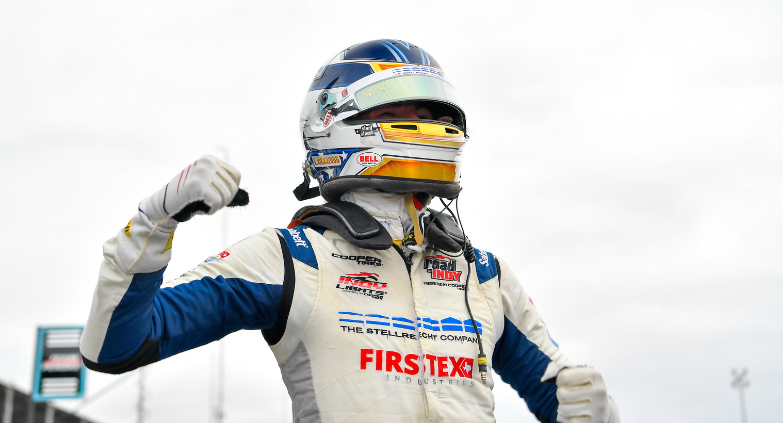 The sizzling fight between championship contenders David Malukas of HMD Motorsports and Kyle Kirkwood of Andretti Autosport continued in spectacular style today with Kirkwood claiming his seventh win of the season in the Cooper Tires Indy Lights Grand Prix of Portland. Kirkwood, who started fourth, finished just over 2.5 seconds clear to whittle his points deficit to just five in arrears with four rounds remaining on the 2021 calendar.

Malukas, who claimed back-to-back Cooper Tires Pole Awards at Portland International Raceway and a series leading six in total, was out of push-to-pass range for the majority of the race, settling for second and his 13th podium of the season.

The race began under cloudy skies with temperatures in the mid-60s. Malukas made a great start to initially take charge of the 30-lap feature followed by Lundqvist and Kirkwood, who found his way around third-place qualifier Benjamin Pedersen (Global Racing Group w/ HMD Motorsports) at the start. But Malukas’ battle with Lundqvist heading into Turns 1 and 2 the following lap allowed Kirkwood to capitalize with a magnificent outside pass to slot into the lead where he was never seriously challenged.

“I am just ecstatic right now. This might be my favorite win of the season so far,” exclaimed Kirkwood. “We haven’t had it the entire weekend but we kept chipping away at it and the car was the best it’s been. It was just on rails, even on old tires. This is super important since they had three wins in a row. That one was a little bit gifted, because they went down the inside and I was able to cross them up and go around the outside with so much more momentum than they had.

“I only had one shot at it, but it was a matter of right place, right time. Once I was out front, it was just about getting out of push-to-pass range and once we did that, we were in a comfortable position. But this win is crucial for the championship and it’s super important especially on a weekend like this where they were so dominant.”