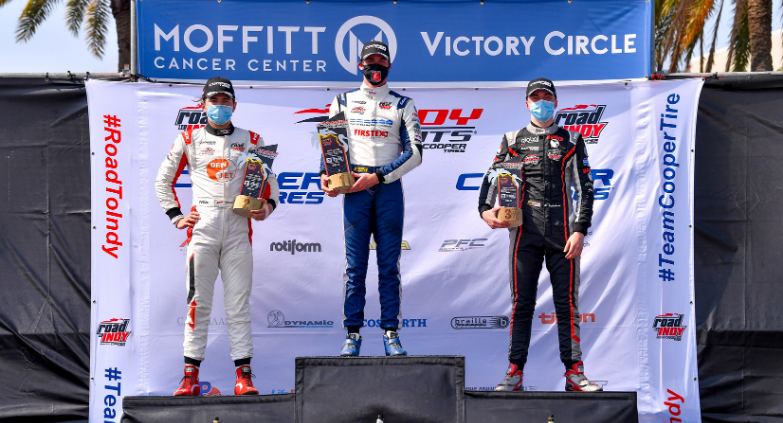 Kirkwood bounced back impressively from a difficult weekend at Barber Motorsports Park last week by leading home Andretti Autosport teammate Danial Frost by a little over a second. David Malukas, who won one of the races last week in Alabama, finished third for HMD Motorsports.

“I got chills at the finish,” said Kirkwood. “This feels so good. It’s been a while since I’ve won in an open-wheel car, and we know we’re going to have momentum for the rest of the year. We had a great start, the tires came in really well, we got the initial gap and were able to maintain it. I was pushing pretty hard with Devlin because the last thing I wanted to do was let him get within 1.5 seconds so he could get on the push-to-pass. I was disappointed to see the yellow, especially with Devlin going out, we could have had a one-two-three Andretti finish. And Danial had incredible pace on the restart so I knew I had to do something, and I was all over the place trying to keep the rear tires under me. It was close, but we were on rails.

“I learned so much about this track from my USF2000 and Indy Pro 2000 races: how the track evolves, how the layout works. They’ve done a nice job over the years of keeping the layout the same, so I was able to take so much information from my years on the Road to Indy.”

The first of two Indy Lights races this weekend, the Indy Lights Grand Prix of St. Petersburg Presented by Foundation Building Materials began with Kirkwood on pole courtesy of snagging his first Indy Lights Cooper Tires Pole Award in qualifying on Friday.
He duly led the field into the heavy braking area at Turn 1, where outside front row starter Malukas locked up his brakes and slid a little wide, which allowed Italian-Canadian Devlin DeFrancesco to sneak into second for Andretti Steinbrenner Autosport.
Kirkwood immediately put his head down and began to extend his advantage, leaving the rest to battle in his wake. And battle they did! Malukas began to heap the pressure on DeFrancesco, with Frost, who was clearly on a mission, hot on their heels. A fine move to the inside under braking for Turn 1 saw Frost slide past Malukas, who then fell victim to a late-braking move by yet another Andretti Autosport Dallara, that of New Yorker Robert Megennis, in Turn Four
From hoping to challenge for the lead, Malukas suddenly found himself in sixth, only just ahead of another fine tussle between points leader Linus Lundqvist (Global Racing Group with HMD Motorsports), from Stockholm, Sweden, making his street course debut, and Australian Alex Peroni (Carlin), who themselves exchanged positions on Lap 7.

Ten laps later, Lundqvist’s attempt to redress the balance at Turn One went badly awry as he left his braking far too late, cannoned into the Australian and spun. He resumed after a pit stop at the back of the field.

In the meantime Malukas had managed to repass Megennis and begun to close on Frost, who in turn was chasing hard after DeFrancesco.

As Kirkwood moved clear to the tune of over four seconds, DeFrancesco’s hopes of wresting the championship lead turned sour as he misjudged his braking for the final corner and skated off into the barriers. Cue a full-course caution.

Kirkwood’s hard-won advantage was erased in a flash but the Floridian was unfazed. He quickly reasserted himself at the restart and even posted the fastest lap of the race just two circuits from the end to cement an accomplished victory – his 22nd on the three levels of the Road to Indy, now only two behind Spencer Pigot’s record tally.

Frost held off the advances of Malukas to finish second, with Megennis in fourth. Peroni completed the top five having profited from a late error by Denmark’s Benjamin Pedersen (Global Racing Group with HMD Motorsports), who rejoined to finish 10th.

“We knew we had pace from the start so my focus was going forward,” said Frost. “We made a few good passes, even if there were a few that didn’t stick. I thought we had a chance on the restart but he did a good job to stay up front. I’m happy to get my first podium of the year, congratulations to the team for the one-two finish. We need to make a few tweaks to the car, especially to deal with all the IndyCar rubber that’s been laid down. But we know where to go and we’re starting in the same place, so if we can do what we did today, we can make it happen.”