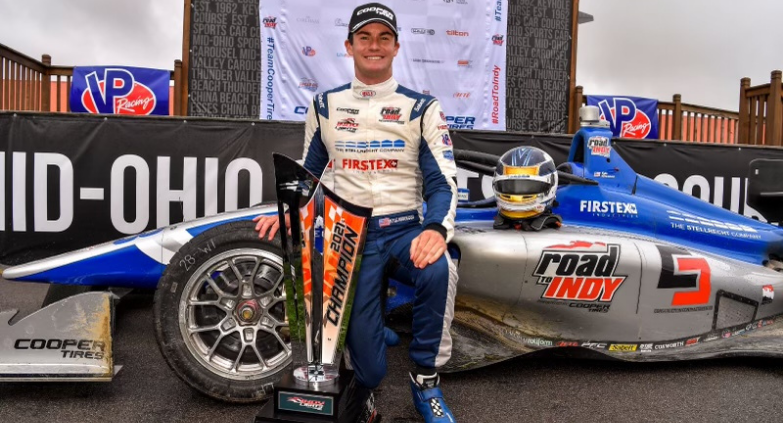 Kyle Kirkwood was officially crowned the 2021 Indy Lights Presented by Cooper Tires Champion Sunday at the season finale at Mid-Ohio Sports Car Course. Claiming the 2021 title, Kirkwood is the first driver to win all three Road to Indy Championships (USF2000 - 2018, Indy Pro 2000 - 2019, Indy Lights - 2021) and the first to capture all three titles in consecutive years, excluding 2020 when the Indy Lights Series did not run due to COVID-19 restrictions.

Teammate Robert Megennis had an impressive start in Race 1 jumping up one position ultimately joining Kirkwood on the podium in third. While Sunday’s Race 2 brought wet conditions, Megennis managed to drive a clean race to finish ninth. After two consecutive podiums at Mid-Ohio in July, Danial Frost came up just shy of another podium to finish Race 1 in fourth. In Race 2, Frost showed control and pace on a wet track as the Singaporean driver advanced three positions from ninth to sixth. As the field came to the green flag, Devlin DeFrancesco had his eyes set on breaking into the top five from his starting position of sixth, but the shuffle at the start of Race 1 forced the Italian-Canadian back a few positions. DeFrancesco rebounded from Saturday’s Race 1 to capture his best start at Mid-Ohio and wheeled his No. 17 machine around the 2.258-mile road course to bring home a fourth-place finish and the eighth top five of his 2021 Indy Lights campaign.

As the 2021 Indy Lights season has come to an end, in addition to the championship title the Andretti stable boasted an impressive year with 10 wins, 10 pole positions and 23 podiums.