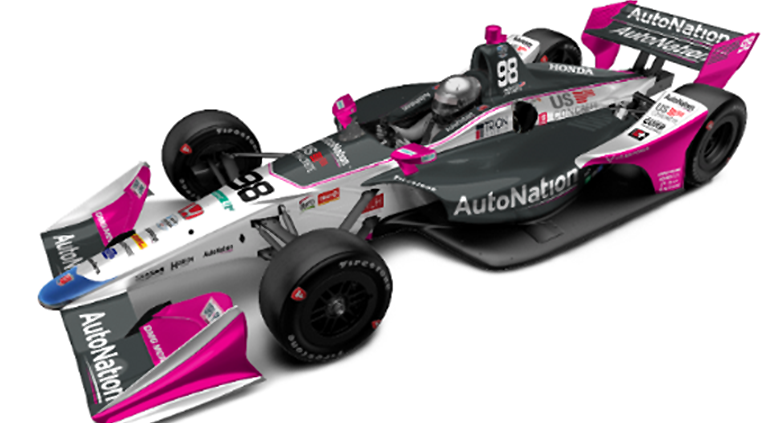 For the second-consecutive year, the color pink will paint the racing machine of Marco Andretti for the double-header weekend on the streets of Belle Isle. America’s largest automotive retailer, AutoNation boasted its DRV PNK campaign on the No. 98 machine in 2018 that went on to collect the pole position Race 1 of the Detroit Grand Prix.

“We’re proud to work with AutoNation to support the DRV PNK initiative and raise breast cancer awareness,” said Michael Andretti, CEO of Andretti Autosport. “We’ve been partners with AutoNation for a while now and our relationship continues to grow stronger. Last year, Marco was able to bring home a pole position in Detroit and a pair of solid finishes. Hopefully we can build on last year and get AutoNation in victory lane.”

AutoNation’s DRV PNK campaign supports breast cancer research and treatment. Raising over $18 million, AutoNation and DRV PNK has more than 250 scientists on six continents researching methods of preventing breast cancer and minimizing the chances of men and women developing the disease. In addition to raising funds for research, AutoNation raises awareness for breast cancer by supplying each car purchased or serviced with a pink license plate frame.

“We had a great weekend in Detroit last year with Marco and Ryan. We’re excited to be on board with Marco for a second year as he continues to support DRV PNK and the fight against cancer,” says AutoNation Executive Vice President and Chief Marketing Officer, Marc Cannon.