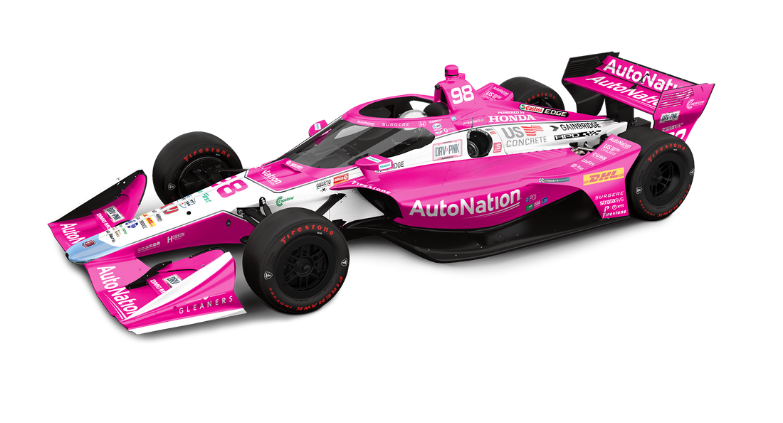 For the third consecutive year, AutoNation returns to Marco Andretti’s No. 98 Honda as the primary sponsor for this weekend’s INDYCAR Harvest GP Presented by GMR doubleheader at Indianapolis Motor Speedway road course. Previously, Marco Andretti has sported the AutoNation colors for the past two years for the doubleheader on the streets of Belle Isle in Detroit. This year, the livery helps kick off Breast Cancer Awareness as AutoNation prepares to Drive Pink across America.

“Every October, we celebrate all that we have accomplished through DRV PNK” said Mike Jackson, AutoNation’s Executive Chairman and CEO. “This year, we’ve taken our mission to new levels, thanks to the incredible support of our Customers, our Associates and our partners.”

AutoNation, America's largest and most recognized automotive retailer, today announced that funds raised for cancer research and treatment through its DRV PNK Initiative have surpassed $25 million, just as the company prepares to commemorate Breast Cancer Awareness Month in October.

Andretti joins fellow AutoNation sponsored NTT INDYCAR® SERIES drivers Alexander Rossi and Jack Harvey, all sporting pink liveries throughout the INDYCAR HARVEST GP doubleheader weekend. They may be competitors on the track, but off the track they are united in their commitment to help drive out cancer.

Andretti will compete alongside teammates James Hinchcliffe [No. 26 Gainbridge Honda], Rossi [No. 27 AutoNation / NAPA AUTO PARTS Honda], Ryan Hunter-Reay [No. 28 DHL Honda] and Colton Herta [No. 88 Gleaners Food Bank of Indiana Honda] for the doubleheader weekend. Race 1 from the IMS road course will be broadcast live Friday at 3:30 p.m. ET on USA Network and Saturday’s Race 2 will be live on NBC at 2:30 p.m. ET.