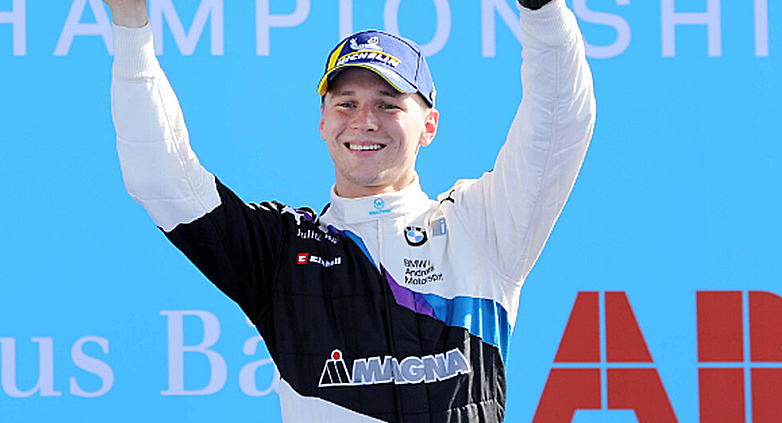 Marrakesh. Maximilian Günther (GER) gave a tactically astute performance in the Marrakesh E-Prix (MAR) to finish runner-up and take his place on the podium at round five of this season’s ABB FIA Formula E Championship. It was Günther’s second top-three result with BMW i Andretti Motorsport in the #28 BMW iFE.20, having previously taken victory in Santiago (CHI). He climbs into fourth place in the Drivers’ Championship, just behind team-mate Alexander Sims (GBR) in third. Sims also drove an impressive race, but was unfortunately forced to retire from fifth place shortly before the finish. BMW i Andretti Motorsport is currently second in the Team standings with 90 points.

Günther started from second place on the grid after a strong performance in qualifying. He set the fastest time in the regular qualifying session, earning himself a point towards the Drivers’ Championship. In the Super Pole, he was only beaten by António Félix da Costa (POR, DS Techeetah), who was just 0.069 seconds quicker. Günther spent much of the early stages of the race, in which efficiency and energy management played a key role, challenging for the lead. Eventual winner Félix da Costa pulled clear in the closing stages, while Günther was embroiled in a spectacular battle for second place with Jean-Éric Vergne (FRA, DS Techeetah). Günther made the decisive overtaking manoeuvre on the final lap.

Sims started the race from eighth place and focussed on saving as much energy as possible in the first half of the race. That paid dividends later on in the race and, as he did in Mexico City (MEX), Sims started to fight his way back through the field to fifth place. Shortly before the end of the race, a scrap with Edoardo Mortara (ITA, Venturi) resulted in contact that broke the track rod on the #27 BMW iFE.20. Sims was forced to retire from the race on the final lap.

Reactions to the Marrakesh E-Prix:

Jens Marquardt (BMW Group Motorsport Director):
“Congratulations to Maximilian Günther on the second podium of his young career as a BMW i Andretti Motorsport driver. The BMW iFE.20 made a good impression all weekend in Marrakesh. It was the same story in the race. Maximilian and the team once again gave a very tactically mature performance, made good use of the efficiency of the BMW i drivetrain, and more than deserved second place. The battle with Jean-Éric Vergne in the closing laps was top class! Unfortunately, Alexander Sims’ car suffered a mechanical issue after contact with Edoardo Mortara shortly before the end of the race. At that point he was running fifth after an intelligent race. It is a great shame that he was not rewarded with some points. After five races, our record this season is still very positive. Congratulations to António Félix da Costa on his win.”

Roger Griffiths (Team Principal BMW i Andretti Motorsport, team standings: 2nd place):
“We came here with high expectations after our performance last year. Maximilian and Alexander impressed in qualifying. We then had a strategic battle with DS Techeetah in the race. We knew that they would be very strong – and we were ultimately unable to stop António. However, Maximilian more than earned his second place with an outstanding performance and great overtaking manoeuvre on the final lap. I feel sorry for Alexander: like in Mexico, he once again produced a fantastic fightback and was set to score a lot of valuable points in fifth place. To be forced out so close to the finish – without, in our opinion, having done anything wrong – is a bitter blow.”

Alexander Sims (#27 BMW iFE.20, starting position: 8th place, race result: DNF, points: 46, driver standings: 3rd place):
“Unfortunately, the race once again showed what a thin line there is between fortune and misfortune in Formula E. I lost a few positions at the start, but was then able to save a lot of energy and win back one place after another with the clever use of ATTACK MODE. It was all looking good until the contact with Edoardo Mortara shortly before the finish, in which my car was damaged. That was that – a real shame. However, congratulations to Maximilian and the team on a deserved podium finish.”

Maximilian Günther (#28 BMW iFE.20, starting position: 2nd place, race result: 2nd place, points: 44, driver standings: 4th place):
“I am really very happy with second place. Today was all about managing the race intelligently. In the first half of the race I was still able to challenge António for the lead. In the end, however, he was simply a little bit too good. Congratulations to him on the win. I then had the battle with Jean-Éric towards the end of the race, in which I fortunately came out on top, thanks to a late overtaking manoeuvre.”