MOBIL 1 AND WAU TEAM UP FOR 27TH YEAR 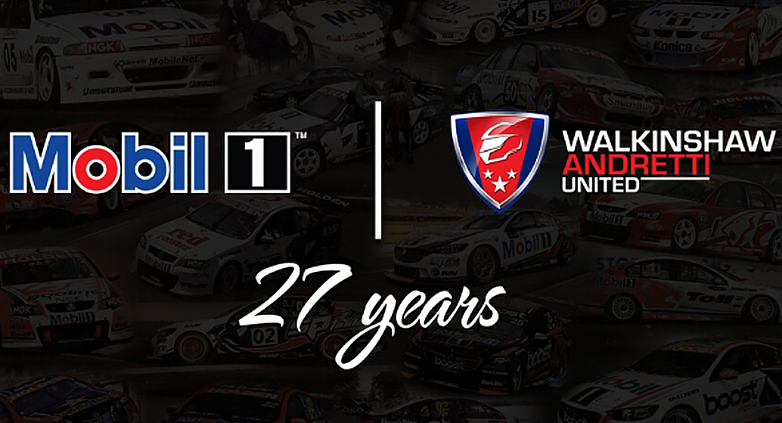 [Melbourne, Australia] Walkinshaw Andretti United has today announced that Mobil 1™ has once again shown their loyalty to the Team, continuing on as a Co-Naming Rights Partner for 2020 Virgin Australia Supercars Championship for an incredible 27th consecutive year.

The multi-year deal will see them remain with the Team into the future.

The Mobil 1 relationship with the Team stems back to 1994, when they joined the then Holden Racing Team and drivers Peter Brock and Tomas Mezera.

Since then, Mobil 1, the world’s leading synthetic motor oil, and the team have shared many successes together, including nine Bathurst wins, eight driver championships and seven team championships.

Unwavering in their support during that period, Mobil 1 have had an increased presence on both cars since 2017, with the formation of Mobil 1™ HSV Racing.

They retain their iconic position on the bonnet of both Walkinshaw Andretti United entries for the 2020 season.

Both Mobil 1 backed Walkinshaw Andretti United Holden ZB Commodores will be revealed in the near future, before the first official test day of 2020 on February 18 at The Bend Motorsport Park.

“The loyalty and support Mobil 1 have shown us throughout the entire 27 years is something our team, and my family, are forever thankful for.

“Their product, as the world’s leading synthetic oil is unquestionable, but it’s their loyalty and support that makes them the company they are.

“When people think of our team, they think Mobil 1; it’s an iconic relationship that rivals any in world motorsport, and we all look forward continuing our journey together for 2020 and beyond.”

“It’s so exciting to be able to announce our continued relationship with Mobil 1™, taking the total to an incredible 27 years.

“The team has shared some fantastic success with Mobil 1 across the journey, and I have no doubt that will continue into the future.”

“The Mobil 1 relationship with Walkinshaw Andretti United is one that is renowned across the globe, and for good reason.

“It’s an incredible association that we are lucky enough to have, and one that we truly value.

“It will be fantastic to see that iconic logo once again on the bonnet of both cars in 2020 and beyond.”

“Together with our authorised lubricants distributors we are very excited to continue our relationship with the Walkinshaw Andretti United Racing Team. With the technology relationship now entering its 27th year, the evolution in the series across this period has continued to drive lubricant advances, and provides opportunity to showcase the performance of our flagship products in demanding applications.”