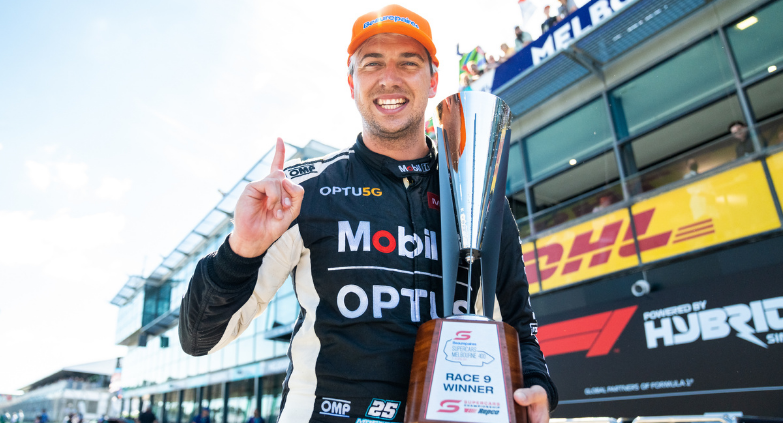 Chaz Mostert has won his second race of the weekend in Race 9 of the 2022 Championship on Sunday at the Australian Grand Prix, with Nick Percat home in sixth, topping off a great day.


The final race of the weekend started with Chaz in third, and Nick in seventh, with both getting away cleanly.


Nick stopped earlier than Chaz, and after a quick stop, rejoined back in the hunt. Unfortunately though, as he was in the lane, contact from Waters – who got a penalty for an unsafe release – bent his steering. To bring the car home in sixth was a great result.


Chaz, the birthday boy, went the longer strategy, which was important, but what really gave him track position was a fantastic stop in the lane. The boys were the quickest in the field, which gave Chaz the race lead as he came out with 14 laps to go.


SVG flat spotted a tyre while trying to catch Chaz, and from there he was never challenged, winning comfortably.


That makes it two wins for the weekend, and second overall on points from the four races.


“Incredible way to end the weekend, and a huge thank you to the team, without there work in the lane today and on strategy we wouldn’t be here.


“It’s certainly a nice way to end the weekend and to celebrate the birthday I guess, we had a bit of a tough day yesterday, so to bounce back is amazing.


“Again, huge thanks to everyone at Walkinshaw Andretti United and all out our partners and fans, what a team.”


“Better day today, thanks to everyone for their hard work,


“We are definitely making gains, I’m more comfortable, so it’s not going to take much to get it all together for some really good results.


“Looking forward to Perth now, and well done to Chaz and the team on the second win this weekend. Thanks to everyone for their support, awesome to see the people across the weekend backing us.”