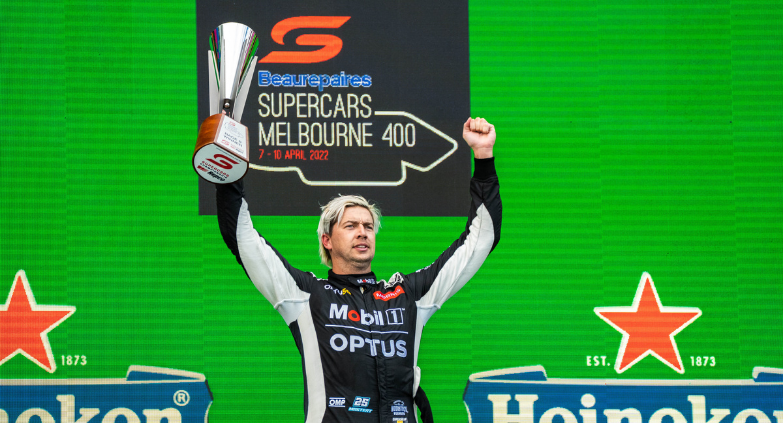 Chaz Mostert has taken the win in the opening race of the Australian Grand Prix weekend, with Nick Percat home in fifth to round out a fantastic day for the team.


After two practice sessions and four qualifying sessions before today’s race, Chaz would start third, and Nick sixth to open the weekend.


The biggest story in the race was the issue with the soft tyre on the newly resurfaced track, causing a strategy re-think on both cars that paid off in the long run.


With both cars starting on the softs – and anticipating to run long – the call was made after six laps to swap to the harder compound.


Chaz was leading before the stop, and Nick comfortably in the top five. It initially dropped them down the order but proved pivotal late.


Chaz hunted down the cars in front to regain the lead with eight laps to go, to which he was never headed, eventually crossing the line eight seconds ahead of the nearest car.


Nick was locked in a battle for the podium in the final stages of the race, which was great to watch, but unfortunately ended up on the wrong side of it. Still, fifth is a great haul of points with plenty of positives to take.


We return tomorrow for two more races, starting at 10:25am.

“Awesome day, we needed to bounce back strongly early this weekend and that’s exactly what we did, so a huge thanks to everyone’s hard work.


“The team did an incredible job to change our strategy plans so quickly and adapt to what was happening.


“It’s such a cool event to be at, we have a heap of support here with us, from partners to fans, so to reward everyone is amazing.


“Well done to Nick too, nice haul of team points so gives us plenty of confidence and direction for the rest of the weekend.”

“Had some great battles out there and a lot of fun today. Shame to miss the podium but we threw everything at it that’s for sure.


“Overall it’s been a good day, think we’ve found a good direction with the car, and plenty to think about overnight.


“Well done to Chaz on the win and the team overall, everyone is working so hard, so it’s really cool to be a part of, especially with so much support here at track.”