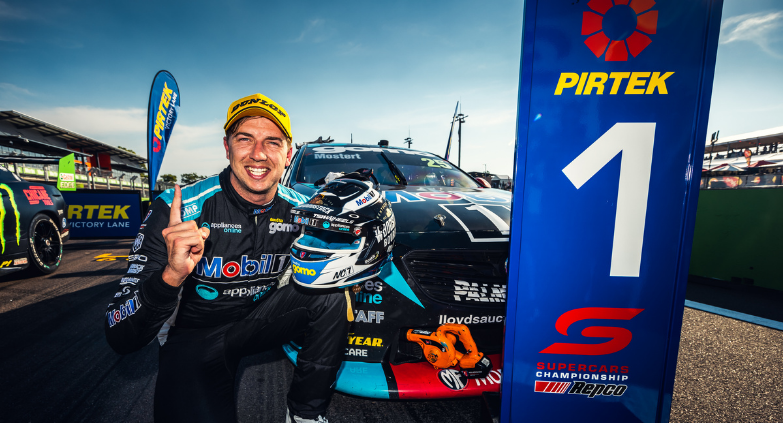 Chaz Mostert has claimed the win in Race 12 of the 2021 Supercars Championship in Darwin, crossing the line in the Mobil 1 Appliances Online Racing No. 25 a massive 12-seconds ahead of second place.

In a great day for the team, Kurt Kostecki brought the Mobil 1 No. 27 home in seventh, and Bryce Fullwood the Mobil 1 Middy’s Racing No. 2 in 11th.

Qualifying saw Mostert advance to the shootout, but he didn’t have the luxury of new Dunlop tyres, putting him in eighth, with Kurt starting 15th and Bryce 19th.

Chaos ensued at turn 1, but all three cars managed to hold their inside line, and stay away from the damage, putting Chaz in third, and Kurt and Bryce on either side of the top-10.

Once Mostert cleared Nick Percat after the restart, he set off after leader Shane van Gisbergen.

Clean stops all round put the boys in a strong position, before a slow stop from SVG handed Chaz the lead with 16 to go.

From there, he was never headed, driving away from the field in clear air, before claiming his second win of the season.

Bryce charged hard late, moving up to 11th, while Kurt did a fantastic job to be comfortably inside the top 10, not putting a foot wrong all day.

Tomorrow, we do it all again with two 38-lap races in the Top End. Bring it on.

“How good is that! We will definitely take it, awesome to get the win today in the Mobil 1 Appliances Online rocket, it was a great race car, and the team were so awesome today, I can’t thank them enough.

“We definitely had some luck today, but we’ve had some bad luck this year at other tracks so I’m just glad it wasn’t us today to be honest.

“We didn’t have the best qualifying car today, so that will be the focus tonight, making that a bit better so we can start up the front and use that clear air again.

“I can’t thank our partners and team enough, so pumped with that win, especially after everyone had to spend a couple of weeks on the road to get here. Can’t wait for tomorrow.”