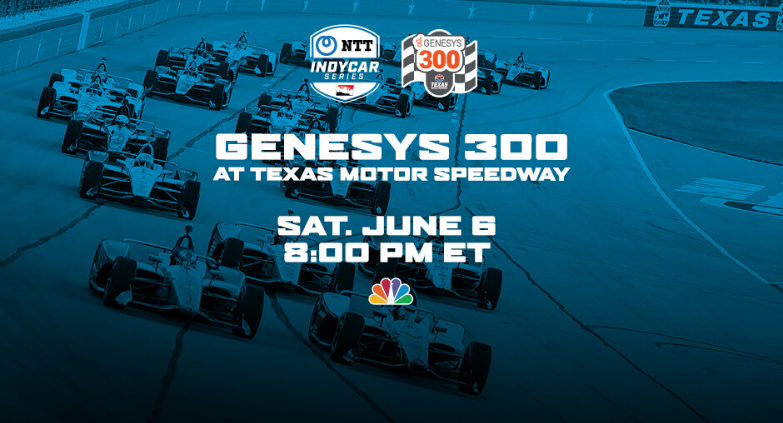 The NTT INDYCAR SERIES will be broadcast in primetime on NBC for the first time when the season-opening Genesys 300 at Texas Motor Speedway is televised starting at 8 p.m. (ET) Saturday, June 6.

The race is moving to NBC from its originally scheduled window on NBCSN. It’s the first INDYCAR race on broadcast television in primetime since 2013.

“We’re pleased the daring nature and bold skills of INDYCAR’s athletes will be displayed to a network primetime audience in just a few weeks’ time,” Penske Entertainment Corp President & CEO Mark Miles said. “INDYCAR’s first season on NBC in 2019 was marked by significant audience growth, and this marquee broadcast slot reflects both our continued momentum and strong partnership with NBC Sports Group.”

“America has a thirst for live sports, so we’re thrilled to showcase the spectacular racing of the NTT INDYCAR SERIES in primetime on the broadcast network,” said Jon Miller, President, Programming, NBC Sports and NBCSN.

The Genesys 300 will be the first race of the 2020 NTT INDYCAR SERIES campaign as the series gets #BackOnTrack. This kicks off NBC Sports’ second season as the exclusive home of the NTT INDYCAR SERIES, including the Indianapolis 500 presented by Gainbridge, which will now take place Sunday, Aug. 23 on NBC.

The second race of the NTT INDYCAR SERIES season, the GMR Grand Prix on Saturday, July 4 at the Indianapolis Motor Speedway, also will be broadcast to a network audience on NBC. A full-season broadcast schedule will be released at a later date.

Today’s news also will be announced on network television, during NBC’s four hour “Indy 500 Special: Back Home Again.” NBC Sports Group also has provided significant TV exposure to the NTT INDYCAR SERIES during the break in competition caused by the COVID-19 pandemic, airing five races of the INDYCAR iRacing Challenge on NBCSN.