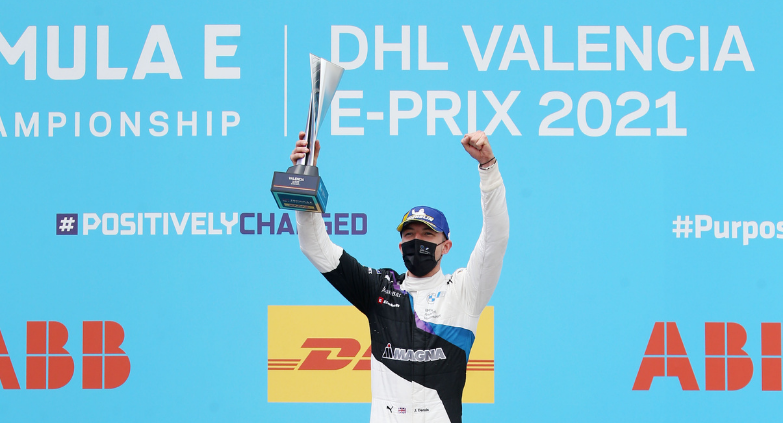 A big day for Jake Dennis (GBR) at race six of this season’s ABB FIA Formula E World Championship. The BMW i Andretti Motorsport driver won Sunday’s race at the DHL Valencia E-Prix (ESP) to claim the maiden victory of his fledgling Formula E career. Dennis, who is contesting his first season in the race series, first secured pole position in qualifying, then led the race superbly from the first to the last lap. This was the fifth victory for BMW i Andretti Motorsport in its third year as a works team in Formula E. After an unfortunate qualifying session, Maximilian Günther (GER) recovered strongly from last place on the grid to finish twelfth.

After what had been a difficult start to the season, and for him personally, Dennis broke the curse with a flawless performance on Sunday in Valencia. Starting in group four in qualifying, he took advantage of the improving grip on a drying track to set the fastest time and progress to Super Pole – something he had never achieved before. As the last man onto the track in Super Pole, he again held his nerve and secured his first pole position with a big lead. The track surface had dried completely by the start of the race, and Dennis made a fine start to hold onto the lead. Thanks to very good energy management and clever use of ATTACK MODES, he was able to retain first place throughout the whole race and took the chequered flag to claim a richly-deserved win. Dennis and the team were rewarded with a total of 29 points.

Günther was unlucky in qualifying. During his flying lap, he exceeded the track limits set before the session by race control. His lap time was consequently struck off, meaning he had to start from the back of the field. However, Günther fought back strongly to finish twelfth – just outside the points.

Reactions to Race 6 in Valencia.

Roger Griffiths (BMW i Andretti Motorsport Team Principal, team standings: 7th place):
“We are super happy! Jake did a phenomenal job. He drove a really mature race, was always able to control the pace and at the same time be efficient. That was the key in the end – together with the perfect strategy that the whole crew figured out. Coming here being at the bottom of the standings we really needed such a good result. We needed it for the team, for the drivers and most of all for BMW and Andretti. It was super important to deliver today – and we did it. On the other side of the garage, there is obviously big disappointment. Starting from the back makes life difficult of course. I think he made the most of it, passing some really strong competitors. Anyway, this victory means that the whole team will travel to the next race in Monaco on a high. But first we will enjoy this evening and the coming days as well.”

Jake Dennis (#27 BMW iFE.21, starting position: 1st place, race result: 1st place, points: 33, driver standings: 8th place):
“I am lost for words. The whole race inside the cockpit was incredibly technical. Pulling a gap at the right point to get ATTACK MODE was so crucial. Everyone in the team did a great job. I’m really happy for everybody. We had such a tough start to the season, but today we turned it around. We are back in it again.”

Maximilian Günther (#28 BMW iFE.21, starting position: 24th place, race result: 12th place, points: 12, driver standings: 21st place):
“Starting last we had a good race, I would say. There was a lot of tough fighting going on with some of the top guys in the field, but we did well. Of course all these fights cost us a lot of time, otherwise we could have finished even higher. Many congrats to Jake and the whole team on the great victory!”