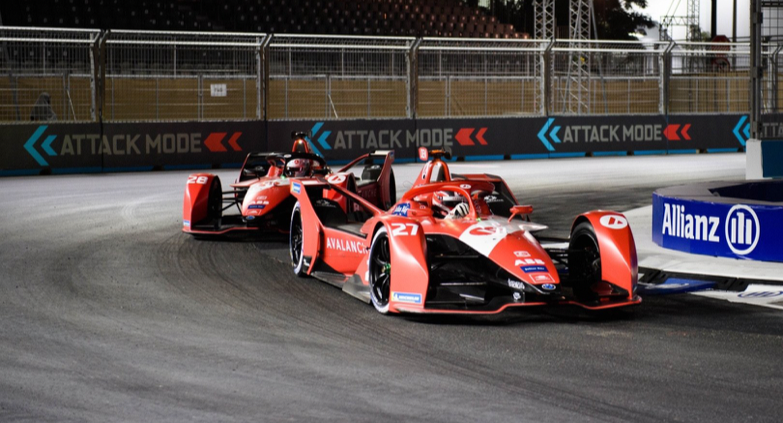 01.29.22 Oliver Askew (Avalanche Andretti) fired off to a super start on debut in Formula E with a measured drive through the field for points and ninth position in the 2022 Diriyah E-Prix Round 1.

The American driver started 17th on the grid and had work to do, especially after slipping two places off the line and tangling with Antonio Felix da Costa (DS TECHEETAH) in an unavoidable racing incident as the pack filtered through the tight opening right-left.

Askew made the most of what was clearly a dialled in race car beneath him - with teammate Dennis proving as much with another podium to pick up right where he left off in Season 7. That pace, combined with some strong energy management - not an easy juggling act in Formula E - meant Askew was able to clamber up into an impressive points finish.

READ MORE: The full Round 1 report

"I guess you could say everything went to plan," said the 25-year-old. "Obviously, Jake (Dennis) showed that the car has plenty of pace in the race and I was able to exploit that myself.

"I started 17th and slipped back a little at the start – I got into a bit of contact with Antonio (Felix da Costa) in a racing incident with everyone just funnelling into the first corner. I settled in from there. I wasn’t really sure what the race was going to provide later on but I knew from watching previous races and what the guys at Andretti Autosport were telling me that anything could happen.

"I was just conserving energy in the beginning. I got by some slower cars at the first corner at the race and it was really play on from there. We were able to continue through the race with maybe one or two per cent more energy than the cars in front of us."

With the upheaval over the off-season of BMW leaving the series, and the resulting changeover of personnel, the team could have been expected to suffer a bedding in period of sorts. The performance Andretti displayed last year looked immediately evident in Diriyah, though, leaving the outfit and Askew hungry for more in Round 2.

WAYS TO WATCH: Where and how to watch every minute of Season 8

"I was a little surprised as to how much pace the car had and that’s something really positive to take away from Round 1 – it’s very confidence building and boosting," said Askew. "The preparation we’ve done at the sim in Munich with BMW and all the guys getting me ready to experience this for the first time has all paid off. It’s very different to what I’m used to but as we go on, I’ll get better.

"Jake said that there’s been a changeover of about 80% of the personnel in the team from last year to this on his side of the garage and they’re all new to me. So, it’s very new and there are a few operational things that could definitely be better and I think in Formula E that’s step one. Getting that perfect so we can execute the races and the weekend better is the next step.

"More of the same is the plan for Round 2. Hopefully we’ll qualify better today – we’d have finished even further up if we’d done that yesterday, so let’s see what we can do. Hopefully we can have another double points finish – it’d be a nice way to end the weekend."