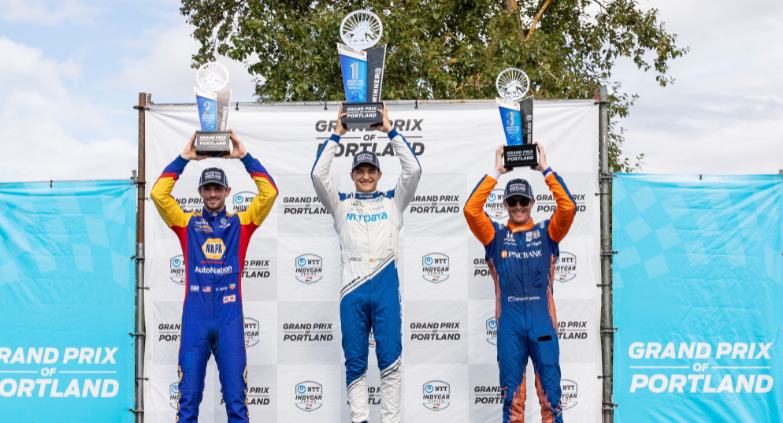 Rossi started the Grand Prix of Portland from the front row, and although he and the Chip Ganassi Racing-Hondas of Alex Palou and Scott Dixon were among those sent to the back of the pack for missing the Turn 1/2 chicane on the opening lap, he kept pace with them and kept pressure on Palou during the final two restarts.

The 2018 championship runner-up eventually crossed the line within 1.5sec of winner Palou and comfortably ahead of Dixon to score his first podium of the season.

“The pace of the car was good all weekend,” said Rossi. “I think we gave it everything we could there on that last stint, and the red tires [softer-compound Firestones] had a window of time where they were a little bit better, and then it was just tough with dirty air, and Alex didn't make a mistake.

“I think we came out of the summer break with some solutions and identified some issues, and I think that's been a positive and kind of carried forward, and yeah, we'll do everything we can [in the last two races]. We've got nothing to lose in these last two, so we'll try our best to take some points away from those guys and see what we can get.”

“It's always going to be hard to just go and drive around the polesitter, but ultimately it was a good day for the team, good in pit lane, great calls, so yeah, started second, finished second.

Asked about Ganassi testing at Portland, and Andretti not doing so, he said the effect had been exacerbated by the format of the race weekend.

“I think when you have a two-day event for really no reason and you only have one practice session and only an hour and a half between practice and qualifying, it makes it hard for the guys that didn't test here,” he observed. “For us to get two cars in the Fast Six [Colton Herta was the other] we were really happy with that.

“And yeah, hopefully the advantage kind of comes back to us in Laguna [where both Andretti and Ganassi have tested] and we can have a little bit of upper hand coming out of the box there. But ultimately I think the team has been doing a good job as of late, and we've just got to keep pushing forward…