RACE RECAP: 103RD RUNNING OF THE INDIANAPOLIS 500 PRESENTED BY GAINBRIDGE

The month of May has come and gone and the Andretti Autosport team was 0.2086 away from kissing the bricks and celebrating another Indianapolis 500 victory.

Starting from the ninth place, Alexander Rossi ran consistently in the top 10 for the first 50 laps of the race before jumping through the field to the top five. The remainder of the 200-lap event Rossi put on a show. After suffering through a mechanical issue on his fourth pit stop, a yellow flag came out allowing the team to maintain a top five position. When the track went green again, Rossi rocketed to second and battled for the lead with Simon Pagenaud. After his final pit stop, a multi-car incident drew a red flag, stopping the race for 18 minutes with the No. 27 car leading the field to the restart. Exchanging the lead with Pagenaud for the remaining 13 laps, the NAPA AUTO PARTS machine crossed the finish line in second when the checkered flag was waved.

Ryan Hunter-Reay and the DHL team completed six stellar pit stops and jumped 14 spots to earn Hunter-Reay his fifth top-eight finish at the Indianapolis 500. The points earned helped RHR climb from ninth to seventh in the standings.

After earning his best-ever starting position at the Indy 500, Conor Daly drove his way through the field and ran in the top six consistently throughout the race. Daly was seen as high as second during pit sequences but ultimately settled for a 10th-place finish, a career best at the Greatest Spectacle in Racing.

Honoring his grandfather's 1969 Indy 500 win with a throwback paint scheme, Marco Andretti entered his 14th Indy 500 with high hopes of taking the Andretti name back to victory lane. After starting 10th, the third-generation driver suffered issues all the way to the checkered flag, finding himself in 26th position at the completion of the race.

Gainbridge driver, Zach Veach, had climbed his way through the field after seeing the green flag from the 28th position. Running as high as 11th, Veach was sitting in 14th when his No. 26 machine was collected in a multi-car incident on Lap 177. Veach was checked and released from the infield medical center and will undergo further evaluation on his right leg, but is expected to be cleared to drive prior to the Detroit race weekend. 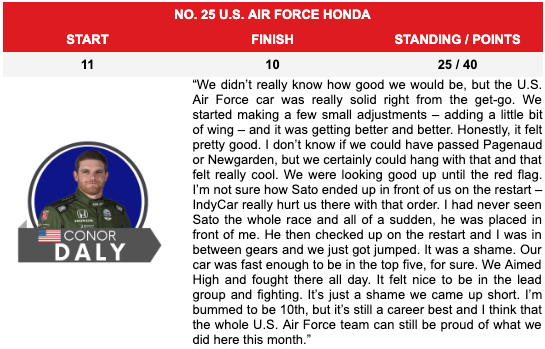 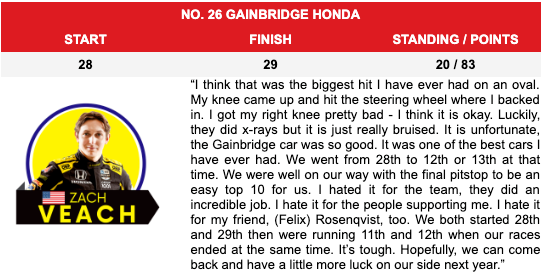