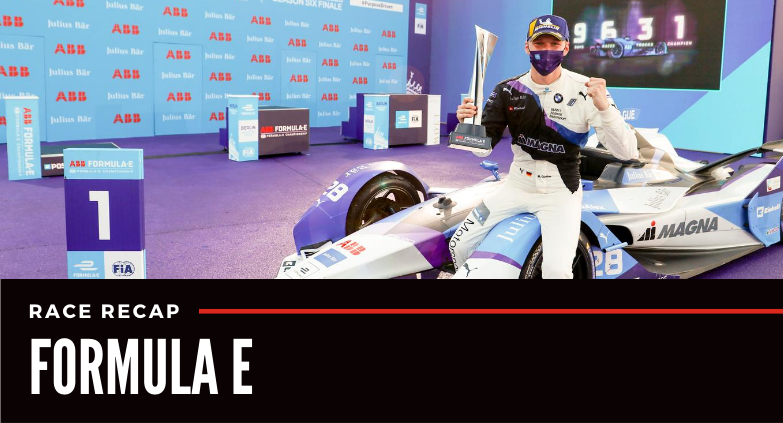 Berlin. Maximilian Günther (GER) celebrated his second win in the eighth race of the ABB FIA Formula E Championship season. In the third of six races making up the season finale at Berlin-Tempelhof (GER), Günther first secured second place on the grid and then, late on, overtook Jean-Eric Vergne (FRA, DS Techeetah), who had been leading until that point, to take the lead. He brought the car home with the narrowest lead in the history of Formula E; he finished 0.128 seconds ahead of the rapidly approaching Robin Frijns (NED, Envision Virgin Racing). In the overall standings, Günther has moved up into second place with 69 points. Alexander Sims (GBR) in tenth also picked up a point. In the team standings, BMW i Andretti Motorsport remains in second place.

One of the keys to success was that, after two disappointing races during the week, the team was able to draw the right conclusions from the problems and, in particular, improve the pace in qualifying. In sixth place, Günther made it into Superpole, where he set the best time for much of the session, with only Vergne managing to beat it. Sims also had the speed for a front-row spot on the grid, but couldn’t quite manage the perfect qualifying lap.

Günther spent much of the race in second place behind Vergne, saving as much energy as possible. Then, with just a few laps left of the race, he made use of the efficiency of his BMW iFE.20 and took the lead, which he had to defend fiercely against Frijns on the final lap, doing so expertly and with nerves of steel. In the sprint to the finish line, he ended up winning by just 0.128 seconds. Starting from 16th on the grid, Sims moved up the field well and crossed the finish line in tenth place. The 26 points secured by Günther and Sims saw BMW i Andretti Motorsport consolidate second place in the team standings, with their points total now at 118.

Reactions to race 8 in Berlin:

Roger Griffiths (Team Principal BMW i Andretti Motorsport, team standings: 2nd place):
“The team made an incredible turnaround from nowhere to victory. 48 hours ago we were all standing around with long faces. Now I’m incredibly proud of every single team member. We’ve worked very hard since Thursday and analysed our problems. It paid off. With the home win for Maximilian and BMW i Motorsport, it is a very special day for the whole team – but for me personally as well. Maximilian drove incredibly cleverly and calmly, saving energy in Vergne’s slipstream before pulling off a great manoeuvre. And Alexander also drove a strong race. There was a lot going on where he was in the middle of the field. He was at the same level as Max in qualifying up to turn nine. Unfortunately, he lost time after that and had to start from way down the field, which is always difficult.”

Maximilian Günther (#28 BMW iFE.20, starting position: 2nd place, race result: 1st place, points: 69, driver standings: 2nd place):
“It’s an incredible feeling. I’m over the moon for myself and the entire team to have won my home race here in Berlin. It was an incredibly intense race right to the end. I planned to attack Jean-Eric Vergne late on, but then Robin Frijns came very close to me again with a little more energy. I had to give everything to withstand the pressure and not let him past me on the final lap. Ultimately, our plan turned out perfectly. No doubt one of the keys to this was that after the two previous races we managed to qualify up there at the front this time around.”

Alexander Sims (#27 BMW iFE.20, starting position: 16th place, race result: 10th place, points: 49, driver standings: 10th place):
“First off, huge congrats to Maximilian and the team for the win! Personally, I had a very eventful race where I was moving up and down the field on a regular basis. Fortunately, compared with the first two races in Berlin, we were able to improve the balance of the car, which enabled me to move up into tenth place and pick up a point for the team.”