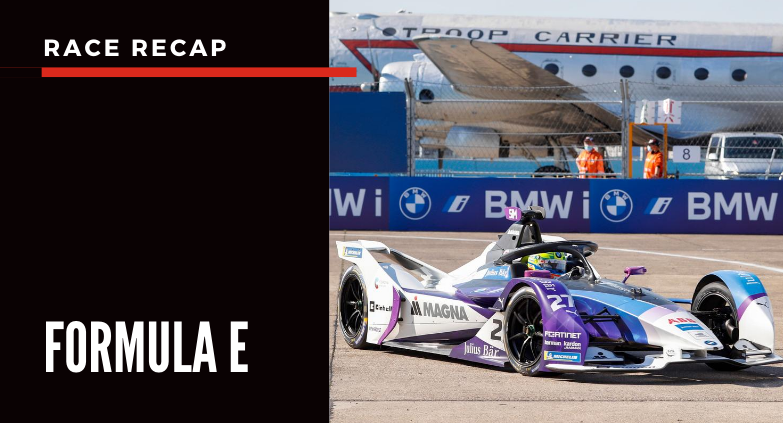 Berlin. Undoubtedly the most extraordinary season of the ABB FIA Formula E Championship, due to the COVID-19 pandemic, drew to a close with the sixth race in the space of nine days in Berlin-Tempelhof (GER). BMW i Andretti Motorsport looks back on three wins and another podium finish, and finishes the second season as a BMW works team with 118 points and in fifth place in the team standings. In the final race, Maximilian Günther (GER) and Alexander Sims (GBR) in 12th and 13th only just missed out on the points. After his first year at BMW i Andretti Motorsport and with two wins during the season – one of which was at the finale in Berlin – and a second place, Günther finished ninth in the driver standings with 69 points. Sims won one race and started from pole position twice. He ended the season with 49 points and 13th in the overall standings.

In the final race, it was Günther who showed strong pace. He set the best time in the practice session and he was also fastest in qualifying group one. But since this group was at a huge disadvantage due to the grip levels on the track, the best time only earned him 18th on the grid. Sims started from 15th on the grid. Over the 45 minutes plus one lap race, Günther showed his potential, gradually working his way up the field and was fighting for eighth place when he was pushed out during a duel with Robin Frijns (NED, Envision Virgin Racing) and lost a lot of positions on the track. Sims was involved in some close battles, ultimately finishing 13th, right behind his team-mate.

Reactions to race 11 in Berlin:

Jens Marquardt (BMW Group Motorsport Director): “The six races in nine days in Berlin were the incredible conclusion of a just as incredible Formula E season. Congratulations to António Félix da Costa and the DS Techeetah Team on their deserved title win. When we got off to a fantastic start in Season 6 with a win and two pole positions for Alexander Sims in Diriyah in November 2019, we had no idea of the global consequences that would come as a result of the COVID-19 pandemic. We’re happy that we were able to finish the season on the racetrack, even though regrettably it was without our fans. BMW i Andretti Motorsport ended the season with three wins, a second place and fifth place in the team standings. It’s a shame that it wasn’t enough for a better result, despite the good job from the team. As already mentioned, Alexander Sims had a successful start to the season, which he was unfortunately unable to build on, particularly in the races in Berlin. Maximilian Günther had a very good rookie year in our team. His wins in Santiago and Berlin were real highlights. Ultimately, what we were lacking to make us one of the main contenders in the title race down to the wire was consistency. We weren’t able to activate our performance from the start of the season often enough in Berlin. We will work on this intensively looking ahead to Season 7 and hopefully improve further in the coming year."

Roger Griffiths (Team Principal BMW i Andretti Motorsport, team standings: 5th place):
“Unfortunately, the final races of the season didn’t go as we had hoped. . Maximilian Günther was incredibly fast in the practice session today. And his performance in qualifying was outstanding, but unfortunately, like everyone else in qualifying group one, he didn’t stand a chance. Despite that, he worked his way up the field well during the race. Then he was unfortunately pushed out in the duel with Robin Frijns, who clearly had a problem with his car, and lots of other cars were able to slip through on the inside. Unfortunately, Alexander Sims also finished outside the points. All in all, the season finale here in Berlin has a bitter aftertaste. We may have won one of the six races, but apart from that we missed out on a lot of points and dropped down from second to fifth place in the team standings. Unfortunately, we were unable to build on our performances from the first half of the season. We learned a great deal as a team this season, which saw us become more of a unit. But if you want to be fighting for the title at the end you need to finish in the points regularly. We didn’t manage that. Looking ahead to next season, we will analyse in detail what we need to do better to take the next step in our development as a team.”

Maximilian Günther (#28 BMW iFE.20, starting position: 18th place, race result: 12th place, points: 69, driver standings: 9th place):
“Today’s race had a very bitter end. I think we were the fastest in the field all day. You could see that in the practice session, as well as in my qualifying group and in the way I moved up through the field during the race. Then, for things to go the way they did just a few laps before the end is a real shame. But I have to accept it. Overall I think we still had a strong season, even though it isn’t reflected in our position in the championship. We brought home wins and podiums, were often quick in qualifying and were able to show that we can catch up from behind in the races, which is really important in Formula E. Unfortunately, this wasn’t rewarded with good results often enough. It’s important to me to stress that I felt right at home in the team from day one, and I really enjoyed the season. Congrats to António Félix da Costa and DS Techeetah on winning the titles.”

Alexander Sims (#27 BMW iFE.20, starting position: 15th place, race result: 13th place, points: 49, driver standings: 13th place):
“It’s a real shame that a season that started off so well for me in Diriyah ended this way. I just couldn’t find the pace here in Berlin that I had earlier on in the season. When we arrived here, I thought that we would be fighting for a top-three spot in the drivers’ championship. So to fall so far down the table is quite bitter. I feel really sorry for the team, who had an outstanding attitude to work, right down to the final race. I’d like to thank them all for their efforts – and many congrats to my former team-mate António Félix da Costa on winning the title.”