Oliver Askew started on pole for the fifth time this season and commanded every lap of Saturday's the 30-lap event to win for the second consecutive Indy Lights Presented by Cooper Tires weekend. With Saturday's win, Askew has extended his points lead in the championship to 35 points ahead of second place Rinus VeeKay.

Ryan Norman started Saturday's Race 1 from the fourth position and with the help of a good start at the green flag and a mid-race yellow for Toby Sowery stopped on track, Norman was able to jump up and finish in second position at his home track.

Robert Megennis started Race 1 on the outside of Row 1 alongside his teammate Askew. The Rookie held second for most of the race before the only yellow of the race plagued the remainder of his race to finished fourth.

Oliver Askew captured the pole position for Sunday's Race 2 as well, setting a new track record along the way. He backed up his weekend sweep of pole positions with a pair of race wins at Mid-Ohio Sports Car Course. With his sweep of the weekend, Askew has now extended his championship lead to 45 points ahead of second place Rinus VeeKay.

Robert Megennis had an action-packed Race 2 after making brief contact with Dalton Kellett on the opening lap in Turn 1 pushing the No. 27 Cybersecurity car off track and causing the race's only yellow flag. Megennis rejoined the field in seventh, and battled the next few laps with Aaron Telitz. Megennis and Telitz continued to battle before contact was made between the two cars leading to front suspension and front wing damage for Megennis, forcing him into the pits for repairs and returning to the track four laps down.

Ryan Norman ran a steady and clean race in fourth, after making up two positions on the start. Norman heads to the next Indy Lights Presented by Cooper Tires event at World Wide Technology Raceway at Gateway as the defending winner. 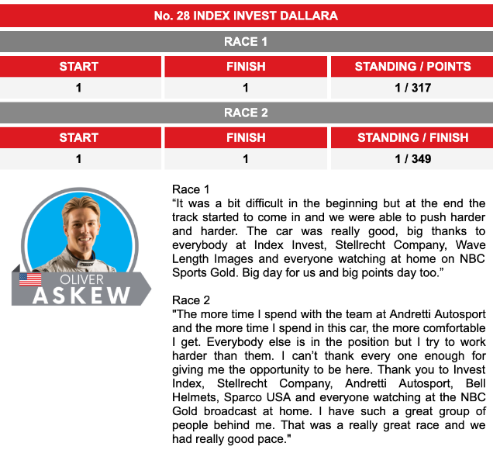 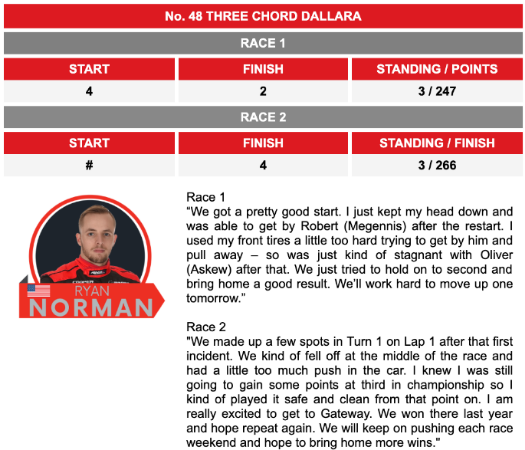 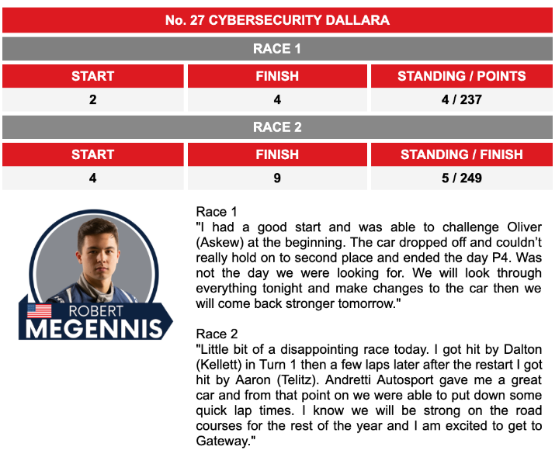