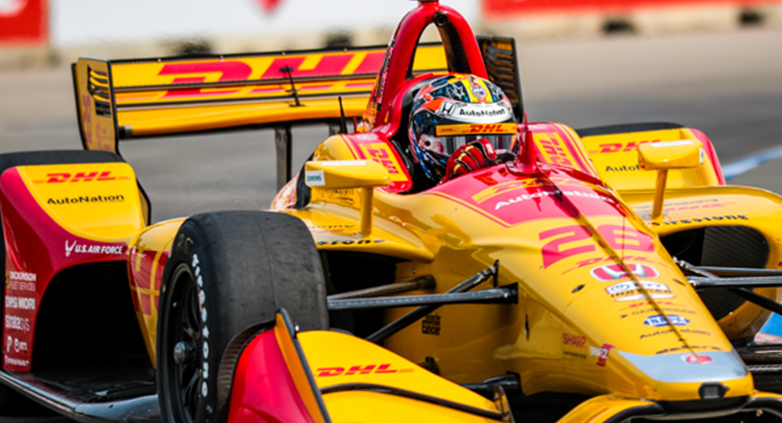 During Saturday's qualifying session Alexander Rossi claimed his sixth-career pole position, his second of the season and second-consecutive on the streets of Bell Isle. DHL driver Ryan Hunter-Reay scored a sixth-place starting position for his 16th start on the temporary street circuit. Zach Veach earned the eighth spot on the grid, while Marco Andretti settled for 18th.

Just before pre-race ceremonies were to start, the rain came pouring down over the Detroit Grand Prix, delaying the green flag and forcing a condensed, 75 minute timed raced with a wet start. The field of 22 started the first race of the doubleheader weekend with Rossi leading the field in a single-file start, but just before the first green flag of the event was waved, Veach spun causing a yellow-flag start. With no damage to the car, the Gainbridge driver took the "restart" from the rear of the field.

On Lap 12, Andretti and his AutoNation crew took a gamble on strategy and made their way to pit lane for a set of Firestone Primaries, the first car in the field to commit to dry tires. The seasoned veteran fought slippery conditions for a few laps and hoped for a yellow flag to fly so the 98 car could jump all the cars that needed to pit.

On Lap 17, that yellow flag came. Hunter-Reay and Veach made it to the pits to switch from the Firestone Rains just the lap before. With only seven cars on dry tires, the rest of the field took the caution period as an opportunity to switch to the primary or alternate compounds. However, the field did not pack up before the pits were opened, so strategy for Andretti, Hunter-Reay and Veach did not play out as planned.

Rossi made a quick pit stop and merged behind Josef Newgarden who had pitted just before the track went yellow, taking the restart from second. Hunter-Reay saw the restart from fifth with Veach and Andretti in 12th and 20th, respectively.

With a couple more caution periods before the end of the race, Rossi pressured Newgarden for his first win on the streets of Belle Isle and Veach battled Colton Herta for position. The Andretti team ended the Saturday Race with a podium and three top-10 finishes.

With the Andretti Autosport drivers taking the green flag scattered throughout the field, race strategy seemed to be different at every timing stand. But, on when a yellow flag flew over the track on Lap 1, everyone's strategy quickly began to change. All four cars made their way to pit lane to rid of the Firestone Alternate tires in exchange for Primaries. With Rossi taking the restart from seventh, Veach from 13th, Hunter-Reay from 15 and Andretti from 16, each of the four had committed to a three-stop race.

After just eight more laps of green flew the second yellow of the 70-lap race. When the second restart occurred, Rossi had jumped up to fourth and Veach to eighth. Hunter-Reay and Andretti opted to pit during the caution and took the restart from 13th and 14th, respectively.

On Lap 33, Josef Newgarden and James Hinchcliffe collided, nearly collecting the No. 27 machine, which was able to escape undamaged and continue on in the race. After six laps of caution, Hunter-Reay saw the restart from fourth with Andretti just behind. Rossi restarted in ninth and Veach in 11th.

With the team's final pit stops being made on Laps 45 and 46, the drivers were in the final homestretch, strategizing on how to climb their way into a podium finish. Another yellow flag flew along with a red flag. When the track resumed to green conditions Hunter-Reay led the Andretti pack in fourth-place, immediately followed by Rossi and Andretti with Veach following closely behind in eighth. All four drivers remained in those positions as the checkered flag flew, placing all the Andretti Autosport cars within the top eight at the conclusion of the event. 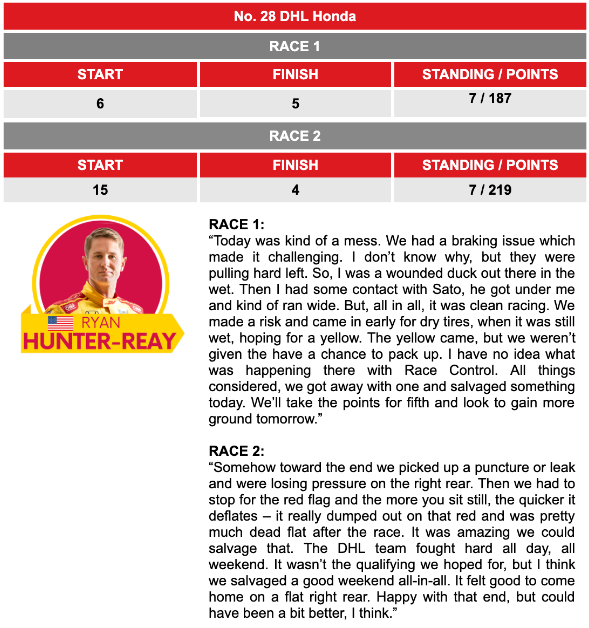 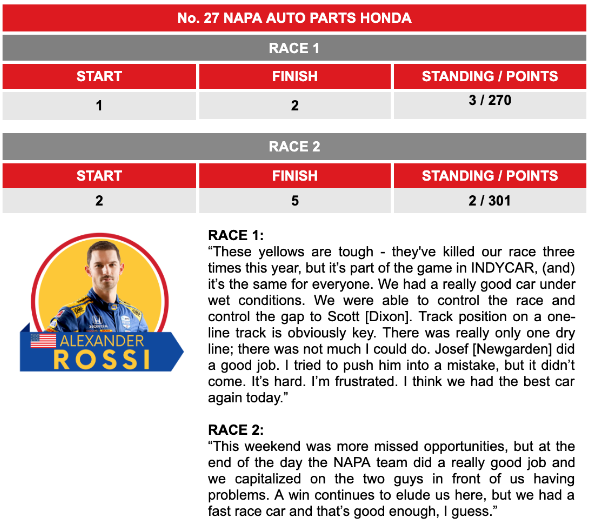 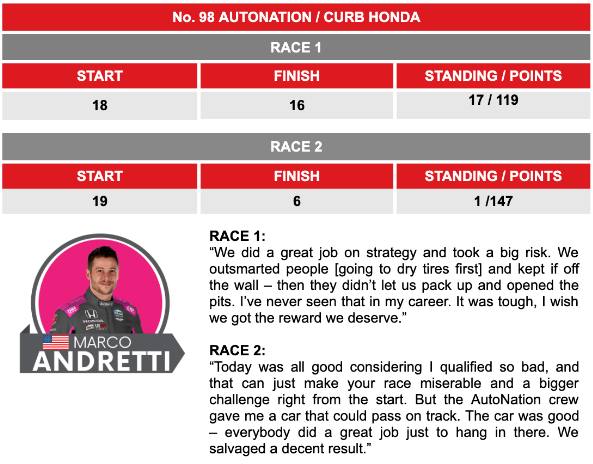 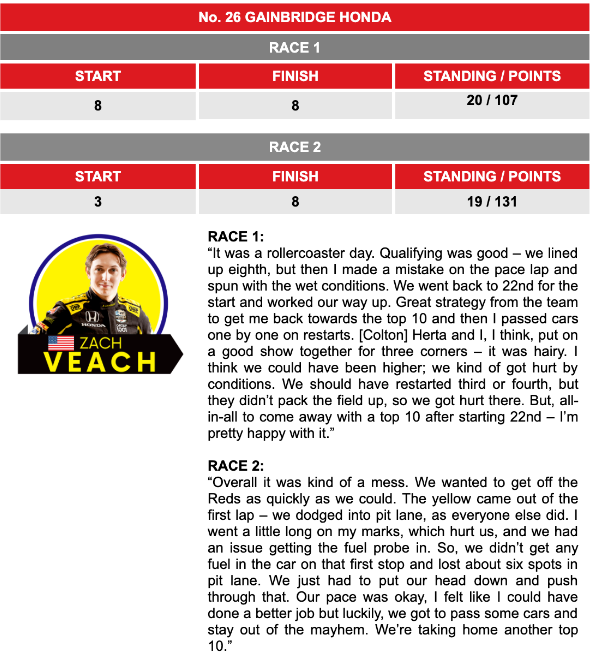