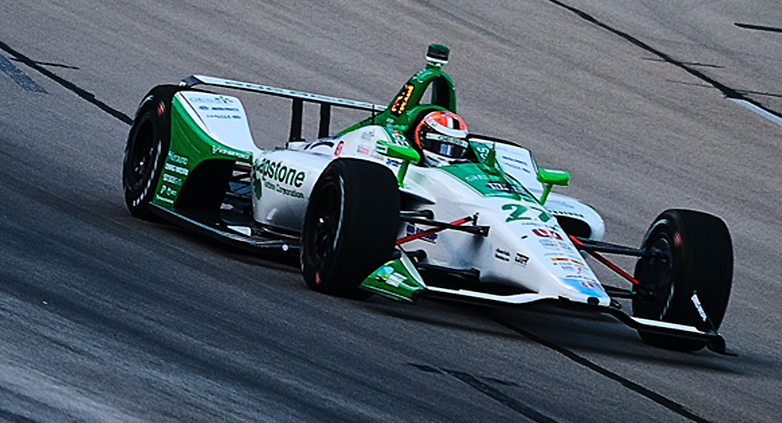 For the first time this season, the field of Indy car drivers qualified their racing machines by standard oval-qualifying procedures - taking their runs in reverse order of championship points and collecting their average times on a two-lap run. The first out for the team was Zach Veach who laid down a two-lap average of 218.074 mph, ultimately placing on the outside of Row 6 when it came time to grid.

Marco Andretti made his run next. With a first lap speed of 218.92 mph, the sixth-quickest opening lap of the 22 drivers. However, on Lap 2 Andretti had a wiggle but was able to recover to bring his No. 98 U.S. Concrete machine to the pits unscathed. While able to save the car, the wiggle forced Andretti to a last-row starting position.

DHL driver Ryan Hunter-Reay was the 16th driver to make a qualifying attempt. With a two-lap average of 219.537 mph, Hunter-Reay earned the highest starting position for Andretti Autosport in the 248-lap event, starting from the fourth position.

Alexander Rossi was the last to qualify of the Andretti quartet. With his second lap quicker than his first, Rossi settled for an 11th-place starting position recording a two-lap average of 218.295 mph.

The NTT IndyCar Series put on a show with 248 laps of racing under the lights of Texas Motor Speedway. The high banked, 1.5-mile oval is one of the fastest circuits on the schedule, where drivers will complete a lap in just over 20 seconds.

With Thursday's two-hour night practice cut to just 41 minutes due to rain, teams were left with little prep time to test how their machines would operate during race conditions.

The DXC Technology 600 saw three caution period - each bringing eye-opening saves, including two spectacular moments for Andretti drivers Zach Veach and Alexander Rossi. In the end it was Rossi taking the top spot for the team, but only after teammate Ryan Hunter-Reay collected the night's most laps led.

Hunter-Reay led 90 of 248 laps, first taking the lead on Lap 64. Running in the lead early came at a cost for the 28 team, forced into a fuel saving race. Hunter-Reay fell back after running extreme fuel maps, unable to aggressively challenge for track position. RHR ended the day in fifth earning a third-consecutive top-five finish, his fifth top-five result of the season.

Rossi charged the GESS / Capstone car from 11th to second and saved the 27 car in dramatic fashion on Lap 228, diving low to the apron and narrowly missing the collided and spinning cars of Dixon and Herta. The driver of the 27 recorded three laps led during his battle with Josef Newgarden before coming home second, recording a fourth top-two finish of the season.

Despite starting from the rear of the grid, Marco Andretti worked his U.S. Concrete machine through the field. Driving a clean, quiet race, the strategy for the 98 team was on point and the crew completed quick and efficient pit stops. Andretti advanced 11 positions to finished the race 10th and sit second in the TAG Heuer "Don't Crack Under Pressure" award - awarded to the driver who advances the most positions throughout the season.

The race started strong for sophomore driver Veach. Running consistently in the top 10, Veach was in the seventh position when he clipped the wall on Lap 134 due to a broken tow-link and spun down the track. With a great save and a pair of flat rear tires, Veach was required to exit the car for a tow back to the garages where the team quickly repaired the Gainbridge car and was back on track just 39 laps later. Veach and the 26 team voluntarily retired with 38 laps to go as it was no longer possible to gain additional track position.

For the first time in an IndyCar race since 2001, the leader board saw five American drivers in the top five spots, including Rossi and Hunter-Reay. 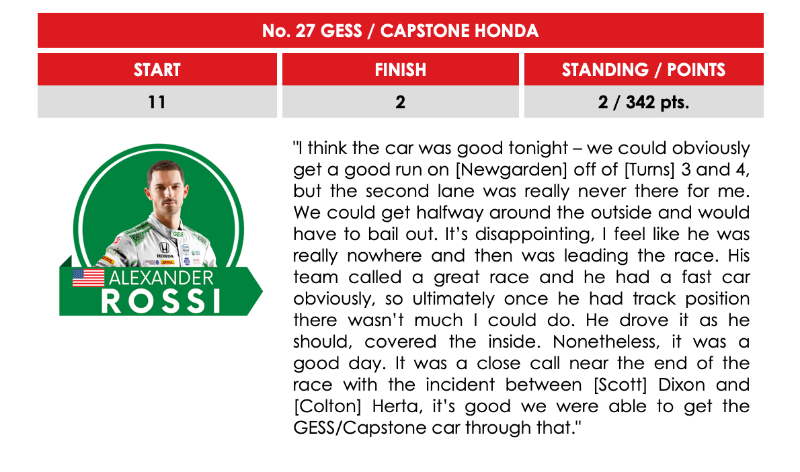 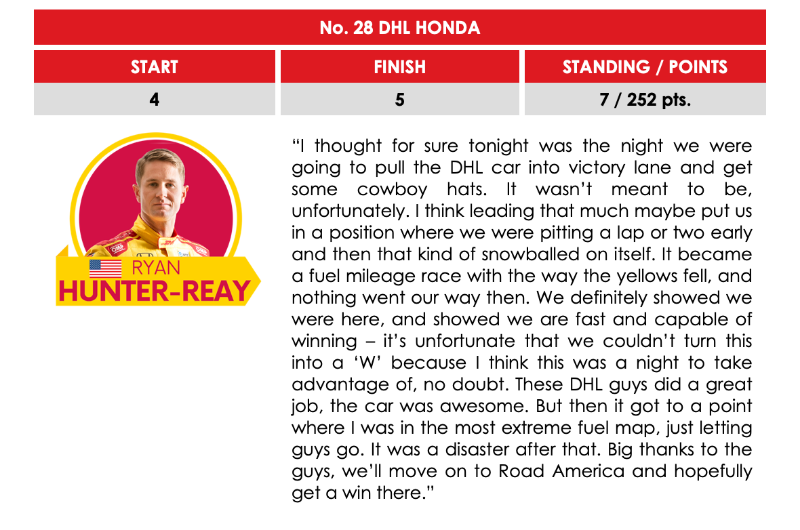