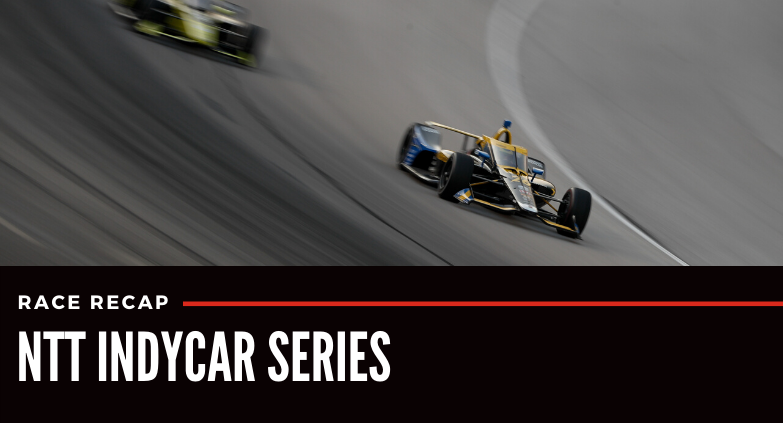 After a three-month delay due to the global COVID-19 health crisis, the 2020 NTT INDYCAR SERIES championship is finally underway. An adapted Round 1 of competition took the field of 24 to the land of No Limits, for the Genesys 300 at Texas Motor Speedway. The one-day show saw practice, qualifying and a 200-lap main event all in one day under the blazing Texas sun.

The race took place without spectators and with limited crew members on a hot night in Fort Worth, Texas.  With social distancing protocols preventing Honda engineers from assisting teams during the engine starting procedure on the grid, an issue with the spec series ECU resulted in Ryan Hunter-Reay, Alexander Rossi, and Honda teammate Graham Rahal, all going at least one lap down to the leaders in the opening laps.

Zach Veach, who started fifth, showed impressive speed all night long while hanging inside the top five the majority of the night while being credited with two laps led. Veach tied his career-best finish (Long Beach, 2018) with a fourth place result on Saturday night, his best career finish on an oval.

Following contact exiting Turn 2 during the day's only practice session, Hunter-Reay got back on track to qualify his DHL Honda in fourth. After the issue on the start led to a drive-through penalty for the 28 team, RHR dropped to back of the field for the green flag. The DHL driver then fought off the "cartoon anvil" and worked his way from the back of the pack for a top-10 finish of eighth.

The No. 98 U.S. Concrete / Curb Honda of Marco Andretti ran in the top five throughout Saturday's practice, with his fastest lap time of 214.264mph. Andretti went on the qualify 11th for the Genesys 300 and was poised for a top 10 before the team experiences a few bumps in the pits and lost ground in the track position race.

Rossi qualified his No. 27 NAPA AUTO PARTS / AutoNation Honda eighth but also had to take the green flag from the rear of the field, followed by a drive-through penalty for unapproved changes after the ECU issue on the start. Rossi was then served an additional drive-through penalty after an issue with the pit lane speed limiter arose. Being dealt a poor hand in Texas, Rossi and the NAPA team worked to salvage the night with a 15th-place finish.

James Hinchcliffe joined the Andretti Autosport stable for the first of three planned events in 2020. Hinchcliffe had a strong showing in the No. 29 Genesys Honda running into top 12 before being set back by a pit issue on his third stop.